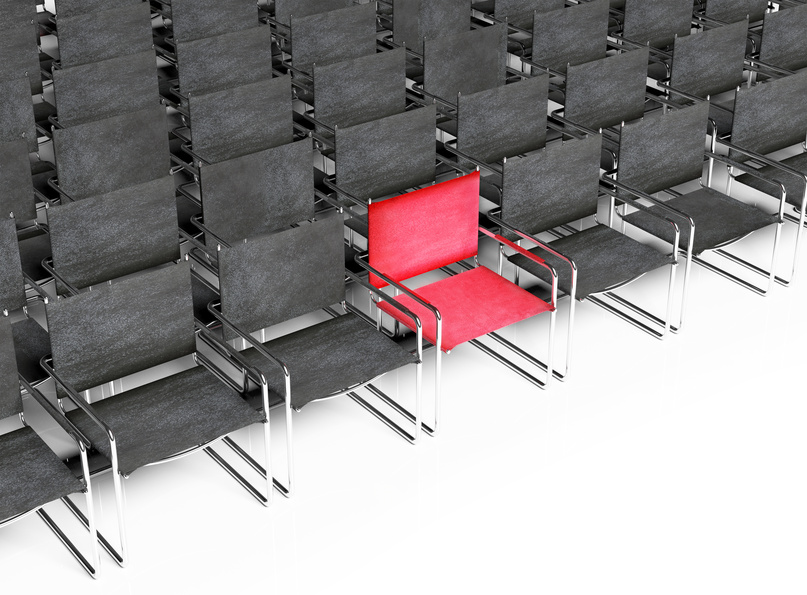 your audience will remember the unusual

Have a look at the picture above this blog post. That is the von Restorff effect at work. You most certainly noticed the red chair. It is so different from the other chairs that it becomes easy to notice and remember. Objects that stand out against their peers are more memorable. The more extreme the difference is, the better the effect works.

This cognitive bias that favours to remember the unusual was first described by Hedwig von Restorff in 1933. In her paper she concluded that any ‘isolated’ item in a list of otherwise similar items is easier to remember than any other item in the list. The interpretation of isolation can be taken very broad. It can be physical isolation, isolation by color or shape, isolation by size, etc.

This is a very powerful communication principle that every scientist should have decent knowledge of. Unconsciously we use it all the time in our communications, but not always very effective. It is only when you start to use it intentionally that you’ll reap the rewards.

We’ve all seen introductions where a scientist introduces the protein she studies. Typically, she shows the molecular pathway where it is active with all players in different colors, and often with lots of unnecessary annotation and cross-talk between other pathways. Maybe she encircles the protein for emphasis or bolds the name. I’m sure you can picture this and maybe you are doing exactly the same in your introductions. This kind of isolation of the main player is certainly not the most effective way. Even if the protein is encircled, bolded and has a vivid color. It will not make it stand out enough, the difference is most of the times not extreme enough.

This image could be used to introduce STAT3 in the IL-6 signaling pathway. STAT3 is certainly crying for attention, but still misses the attention it deserves. (taken from http://www.ijbs.com/v07p0536.htm)

One important reason you see this happening all the time is that scientists like to be complete. They like to present all the elements involved and don’t leave anything out. Every element is important. And it is… but not for every story.  To communicate your idea or research you should focus on the one thing that makes the research noteworthy. Or as Einstein has put it: “Everything should be made as simple as possible, but not simpler”.

To introduce your protagonist protein in an effective way, you could color it in a highlight color, while the rest of the pathway could be pictured in shades of grey. Besides this, you want to strip the pathway to the bare minimum and only show the players that are important to understand the remainder of your story. Your audience will be engaged and they will remember more of what you had to say. You used the von Restorff effect effectively.

An alternative approach to introduce STAT3 in the IL-6 signaling pathway. Here the von Restorff effect is working very well. This figure needs further explanation of the presenter to understand the whole story, but everybody will grasp immediately that the protagonist is STAT3.

Now do it again, and again. You’ll see that it works and people will start to see you as a powerful communicator.

What Scientists Can Learn From Designers (Matt Carter, May 2015)