You are here: Home1 / Interviews2 / Lydia Wysocki on science comics as art-science collaborations

Lydia Wysocki is a Newcastle-based comic connoisseur who shares her experience researching, making and running workshops about comics. So far, Lydia has done three projects for Newcastle Science Comic.

Hi Lydia! Tell us about how you got involved with science comics.
I am working as a research assistant and doing my PhD in education at Newcastle University. My focus is on how comics can communicate not just specific information but bigger ideas, particularly our ideas of belonging and national identity. I also run Applied Comics Etc. and Newcastle Science Comic, which are collaborative initiatives for making comics, and using them for specific purposes. There are definitely some people involved with science comics who are more purely working as artists, or others more purely as scientists, whereas I am something else I think.

Ever since I was little, I’ve been making, drawing, cutting and sticking different kinds of things. My first degree was in history. After that, I worked for a few years and then trained as an English as a Foreign Language teacher. Working in Nanjing, China for 2 years, in Nanjing, I started to see how powerful words and picture can be when working together. You can draw a picture of an apple on the board and people go: ‘Oh, I know what you mean. I don’t know the word for that but I know what you mean.’ But if you explain it in two different languages, you won’t necessarily get that point across. That is a very obvious example, that pictures can help people to learn languages.

I thought: okay, there is something in this. When I moved back to England to do a Master’s in international development and education, I found I really missed making worksheets for students and I started doing bits of that in my free time. I got to know Paper Jam Comics Collective, which is a Newcastle group that meets monthly to make and talk about comics.

I got talking with them, became part of the group, and started making more of my own comics over a few years. Through conversations with the public engagement manager at Newcastle University, in 2013, we realized that with the British Science Festival coming up, which could be an opportunity to do something with science and comics. This would be a way of making science more accessible to different audiences, and enthusing science researchers about public engagement and communicating their work to a younger audience without dumbing it down.

Why should science comics matter to young scientists? 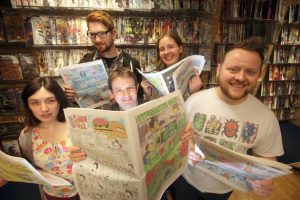 For Newcastle Science Comic, we’ve done three projects so far: one mini pilot project and then two bigger anthologies- Asteroid Belter and Spineless. I think there’s a few ways in which they’re relevant to young scientists.

One: it took a lot of people to make it happen. It wasn’t just that someone had the idea and did it in on his or her own. Six editors, and 76 contributors make Asteroid Belter, for instance. We had to be clear about the role of the scientist and the role of an artist. The scientist might have ideas about the storyline or what the characters should look like, but their role is much more about providing science information is and keeping that on track. The artists and writers might be interested in what the science is and they need to understand that, but their focus is on making a good comic: not just drawing the scientist and illustrating their life story, but finding the story that could work.

The other important point, particularly for young scientists, is the public engagement part of it. It’s not simply putting anything in comics form. It has to easy and fun to read by finding ways for people to understand the research that you’re doing. Not losing the integrity of the work, but also not making a bad comic, because if it’s a bad comic no one is going to read it anyway. There is something about having that balance and focusing on the audience and how they are going to engage with the scientific work and as well as the comic.

Lydia Wysocki’s three pieces of advice to the science or tech person who wants to create the best possible science events!

Julia Turan, neurobiologist and science communicator, is currently Communications Manager at The Physiological Society. She triturated, pipetted, imaged, and analyzed, during her undergrad years studying neurobiology. Since then, she has shifted into the world of science communications, hoping to promote a language of science legible to all. She completed her MSc in Science Communication and Public Engagement at the University of Edinburgh.
Fostering a better-educated community — the Hamed Mirzaei Foundation