The forthcoming science comedy show for girls, Science with Sophie, has a simple message: any girl can find science around her, and be a brave, curious, silly and smart scientist. Crastina’s Julia Turan had a chat with the creator Sophie Shrand. 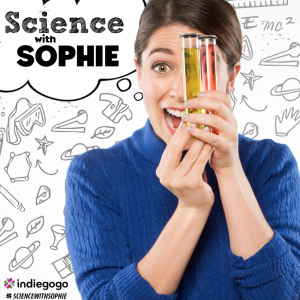 This interview is a part of the bimonthly theme of Nov–Dec 2016: ”using oral communication to inform, inspire & instigate.”

How did you get interested in science, drama, and bringing the two together?

Science and drama are in my blood. My grandmother was an actress in South Africa and my grandfather was a pediatrician. My dad is a child/adolescent psychiatrist who was a child actor on the PBS show Zoom back in the 70s. My mom is an artist, and very much an advocate for education. I had the good fortune to have a family that supported and encouraged whatever I was interested in.

I started acting 22 years ago. I reached a crossroad when deciding what to study in college. I wanted to do both: some kind of science and some kind of performance. Northeastern University in Boston was one of the few schools that said, “sure!” In 2011, I received my double degree: Bachelor of Science in Behavioral Neuroscience and Bachelor of Arts in Theatre with Concentration in Performance.

Afterwards, as a Science Theatre Educator at the Museum of Science in Boston, I became hooked onto working with teenagers. They have untapped potential a lot of the time that adults often underestimate. Having researched brain development gives me extra perspective on how important it is to influence a child as early as possible. The earlier we can spark interest, confidence, and curiosity, the better.

Really, theatre and science ask the same questions from different angles. Why are we here? Why do we behave the way we do? Who are we as human beings? Both aim for the improvement of society. Through behavioral neuroscience and theatre, I’ve come to appreciate the world’s interconnectedness: from the micro-scale of the human brain to the macro-scale of human society.

Science with Sophie will be a comedy show. How do you make people laugh about science? Is it different from making them laugh in general?

The show harnesses the power of patterns in comedy. Patterns are essential to both comedy and science. The show is full of patterns. For example, a joke pops up in one episode, is twisted in the second, and heightened in the third. Structural elements in comedy are very intentional. 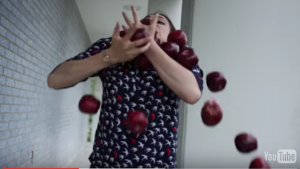 I make science funny by showing it is relevant and real: Relevant by using language that kids recognize. Real by noticing the humor of everyday life and looking at that through the scientific frame, turning scientific inquiry goofy and funny.

I play all the characters in the show. This is fun for me and also encourages girls and everybody else to just be silly and take risks. Literally and figuratively put on different hats and see what you like. The characters are both scientific and funny.

Take, for instance, the moment when the brain sumo suit tries to sit down on the couch. It’s pretty simple. I mean, it’s physical comedy. But on more a subtle level, it’s also the combination of facts and fun. I also am constantly making weird faces and will use slapstick and fart jokes. It’s comedy gold. 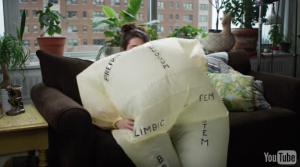 How do you make the show interactive?

The call to action of the show is to encourage girls to do science every day. Episodes start with a place and an observation about everyday life. A place where a kid might find herself, like a kitchen or the street or school. A place that could be just about anywhere in the world. For example, there’s an episode about potholes that starts with me riding my bike down the street and falling into a pothole. So that begs the question: what are all these potholes? Why are they all over the city? What is going on?

I also ask direct questions to the audience. Where have you seen a pothole? Encouraging them to look around during the show, and then come back and join us.

We also have experiments using everyday materials. In the pothole episode, we have an experiment that just calls for a cup and water, maybe a pen. That’s it. They’re all designed to be accessible to show that you have what you need to do science. It doesn’t have to be fancy equipment. You don’t have to be in a lab, in a lab coat, with a PhD. You can do that, but you can also do science right now, right where you are.

The last part of the interactivity is encouraging people to get involved in writing suggestions for the show. So kind of evocative of Zoom, back in the day, where you could write in to the show. Encouraging people to take instagram photos, tweet about what they’re doing, share their own science discoveries and adventures as they go and create a growing community of input about the show.

We’re also going to be interviewing women who are experts in different STEM fields, and kids. So it’s kind of like Billy on the Street. Fast-paced, silly, street interviews. He asks people on the streets of New York City crazy questions. I’ll be going up to kids and asking things like, “What do you think snot’s for?” Just getting weird quick, silly, but still scientific questions.

Who is your target audience?

Quite a wide age range, 7-14. Like I said earlier, we want to reach kids as early as possible. At age 7, they’re really thinking pretty critically, are inquisitive and curious, and have a natural inclination to explore the world. As they become pre-teens, peer pressure builds. I can speak both from the data and from my personal experiences, having been a girl! There is this pressure to not look stupid. Being smart isn’t considered cool. Math and science aren’t considered to be girls’ territory. That math is hard. So there’s messaging from all kinds of places, from peers and adults.

My goal is that I can get kids on board when they’re young. Permeate their world with encouraging messages. Arm them with confidence, silliness, lightheartedness and serious scientific inquiry, into high school and beyond by sticking in their minds like Bill Nye did for us millennials.

What are your goals with the show?

My number one goal is changing girls’ attitude about science. Help them know that they can do it. They already have a ‘science identity’. If  every girl can grow up to think scientifically, think confidently and deeply about various issues, then I think the world could be a very different place.

We should teach the next generation to collaborate, solve problems, and think critically. Encourage future entrepreneurs to think like scientists, politicians to think like engineers. We would enable a very different kind of global conversation.

Why does your project matter to young scientists?

I have met very few women in science who’ve told me they’ve never had a challenge being a woman. Preconceived notions, gender gaps, gender bias and all of that, it’s real. There’s a lot of data to prove it, and then there’s a lot of anecdotal evidence from people like me.

Young scientists are going to set the tone for their cohort of inventors and discoverers. They’re also going to be mentors pretty soon. They will soon have a responsibility to say to the next crop of scientists: “Science is place where everybody’s invited and every opinion counts. We need people from different backgrounds, different perspectives. We need all of the different voices in the room.”

There is a vast under-representation in the science fields. We could accomplish so much more if those people were given a voice. This young crop of scientists is going to be responsible for helping make that happen. And I consider myself one of those people.

What is your advice advice to scientists who want to engage with young people?

1) Make science relevant and fun. Being an improviser and comedian has really helped my science education career. I love working on the fly based on the audience’s interest. If you are working with young people, meet them where they are. Even better, ask them. Ask them what they care about. Ask them what’s important to them, what’s exciting to them. and then go from there.

2) Excitement is contagious. The way that I see the most lightbulbs go off is really bringing your own passion to the table. If you share what you care about, that will shine through. Caring is sharing. Sharing is caring. Sure! The word passion is washed out from overuse. Let’s reclaim it, because it is absolutely contagious.

3) Donate to this campaign!  When we see the importance of a project, we need to support each other’s work. This campaign is hopefully the beginning of the show. For us to get it off the ground, we call upon scientists, and people who care about women in STEM, to step up and join. Vote for it with your dollars. Every dollar counts.

Julia Turan, neurobiologist and science communicator, is currently Communications Manager at The Physiological Society. She triturated, pipetted, imaged, and analyzed, during her undergrad years studying neurobiology. Since then, she has shifted into the world of science communications, hoping to promote a language of science legible to all. She completed her MSc in Science Communication and Public Engagement at the University of Edinburgh.
November 30, 2016/0 Comments/by Julia Turan
https://crastina.se/wp-content/uploads/2016/11/sophia_shrand.png 1254 1250 Julia Turan Julia Turan2016-11-30 22:24:002017-08-02 11:40:36Girls in STEM: brain, farts, and a female science comedian
0 replies

The Colour Blue – an interdisciplinary symposium

Women of Science engages people about the lives of female scientists.
Scroll to top