The upcoming ImagineScience Film Festival is held across New York City between October 14 and 21. Here, the founder Alexis Gambis describes the story behind it to Crastina’s Julia Turan, and explains the challenges of portraying science in film.

“When people ask me how I made the transition from scientist to filmmaker, I explain that it was organic,” says Alexis Gambis, self-described scientist-veered filmmaker. Apart from founding the ImagineScience Film Festival, he has also launched the beautiful site Labocine, which reviewers have called “science new wave” cinema. His debut feature film, The Fly Room is touring in over 50 cities internationally. 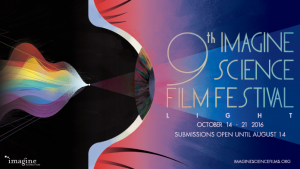 Can you tell me about your journey into science film, and starting ImagineScience?

I’m a molecular biologist and a geneticist by training, but I’ve always had an interest in film. I grew up with both of my parents working at the intersection of art and science. Studying vision in fruit flies during my PhD at Rockefeller, I became really interested in filming my experience, visualizing what I was doing.

I started taking film classes alongside my lab life, and created a cine club for science films. We showed all sorts of genres – documentary, fiction, experimental – to the scientific community and enabled a discussion about how science and scientists are portrayed. Cine clubs sprouted across New York, in bars, cinemas, museums, and scientific institutions. PhD students, postdocs, young artists and filmmakers filled the seats. The event became more than a film club, with panel discussions, music, and installations. To encourage the attendees to collaborate, we created a competition for young filmmakers and scientists to work together on films.

Rather than focusing on the scientific message or advocacy, the featured films consider how science bleeds into different disciplines. The focus is on innovation, imagination, and narrative. 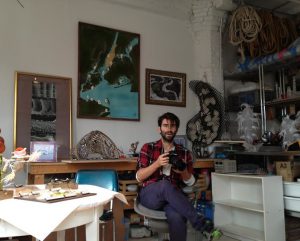 What are the challenges in portraying science in film?

At its core, there is debate as to how to best communicate science in film. People are often under the impression that science films need to be pedagogic, conveying a moral or message. They forget that a film is a film, and think that some of the films we show aren’t scientific enough. On the other end of the spectrum, people think that showing lab footage is not cinema. This fundamental controversy is exciting, and promotes discussion and debate.

The portrayal of scientists is another tricky point. Biopics about scientists almost exclusively focus on big names- Alan Turing, Steven Hawking – while the 25-year-old PhD student, who plays the guitar and mountain climbs, falls by the wayside. There need to be more films made about ‘ordinary’ scientists, and how their work in influenced by other parts of their lives.

Really, when people don’t feel that you’re lecturing to them and can engage with the narrative, the film can reach a wider audience and have a larger impact. With so many topics being politicized, one forgets that the most important part of a film is the story. While the subject of my new feature film is the birth of genetics in New York in the 20s, it’s really about a little girl trying to understand who her father was. This narrative transports us into specific world, a specific environment and we learn the story of science, without anybody feeding us information.

We need to realize that almost everything that we know about scientific advancement or scientific research is subjective. Empirical objective truth doesn’t exist. It’s always emotionally charged. Behind scientific discoveries are anecdotes.

On the other hand, it’s important not to dilute or dumb down scientific explanations. If you have scientists in a film, having a conversation, you want to make sure that you’re not afraid of the vocabulary, and the way they speak.

What advice do you have for an artist, filmmaker or scientists, who wants to break into science film?

For one, we call it a science film festival, but really science film is just any other type of film. If you’re a science student, at any level, do not forget that there are different paths you can take, and filmmaking is one of them. As glamorous as it can sound, filmmaking also involves the same challenges of funding, piecing together specific parts of a story, and constructing a narrative. It’s strikingly similar actually to the scientific process where you have to come up with experiments and construct a narrative that makes sense for publication. When people ask me how I made the transition from scientist to filmmaker, I explain that it was organic.

Julia Turan, neurobiologist and science communicator, is currently Communications Manager at The Physiological Society. She triturated, pipetted, imaged, and analyzed, during her undergrad years studying neurobiology. Since then, she has shifted into the world of science communications, hoping to promote a language of science legible to all. She completed her MSc in Science Communication and Public Engagement at the University of Edinburgh.
October 5, 2016/0 Comments/by Julia Turan
https://crastina.se/wp-content/uploads/2016/10/unnamed.jpg 673 839 Julia Turan Julia Turan2016-10-05 16:58:432017-08-02 11:37:19Innovation, imagination, and narrative: Science new wave cinema
0 replies

Web videos in science and research communications
Scroll to top