According to Michela Vignoli, music and science relate naturally through our human nature as curios and creative beings. “Music can be understood as something utterly exact and analytical; however, I prefer to apprehend music as an emotional expression,” says Michela. 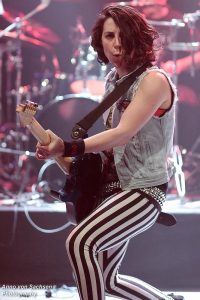 Her science world – the analytical and precise one – is dedicated to exploring novel ways of scholarly communication going beyond traditional research channels. In the European Commission’s Horizon 2020 project OpenUP, she explores novel communication strategies to reach target audiences beyond academia. Being an Open Science expert at AIT Austrian Institute of Technology, Michela dwells also into research topics as alternative peer review, citizen science and open data. In addition, she’s involved in open science community as well as consultation activities.

That scientific world, her research path, gets complemented by the creativity developed through her hard & heavy metal music, as she’s lead singer and guitar player in the band Grim Justice during her spare time.

While growing up Michela always played some musical instrument, influenced by her art fond family; so she got interested in music way before science. At the age of 16 she started playing electric guitar. “I started my band career a couple of years after I moved to Vienna – about 6 years later. This is probably about the time when I became interested in research due to my studies. However, I never really planned to become a researcher. It just happened as a natural consequence of the career path that I was pursuing in the final phase of my studies,” says Michela.

Do you think your music skills help you in your life as a scientist – and viceversa? How do they inspire you?

“That is a tough question. What definitely is tremendously helpful (from music) is the ability to speak and be self-aware in public, which I both can train at conferences and on stage. Through the singing also my speaking voice is more definite and sound, which helps a lot for talks. Also I am usually not nervous when I need to address large audiences.”

Michela assures music helps her a lot to get the complex thoughts out of her head, which are difficult to get away from in the spare time. “To be honest, I experience science and music as two complementary worlds; I need music to be able to cool down and to express myself freely after the hard brain work”.

In her own words: music gives more room to emotions and creativity, both excellent tools to inspire and achieve new ways of research.

Her band and music are close to her heart. She worships the social harmony with her Grim Justice bandmates. “I think that friendship is also a very important aspect of making music together and I’m very happy to have found such great people tomake the music I love with,” she says. 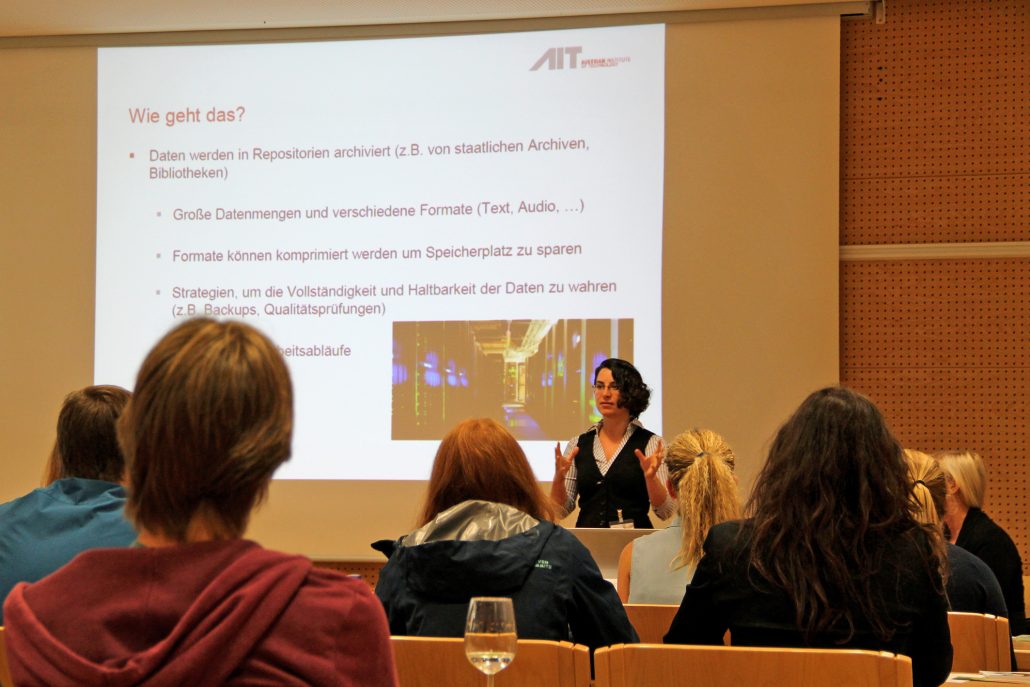 If you had the opportunity to research and explore how science and music are related – what would you choose to investigate?

“I think it would be interesting to analyse how emotions affect the work of researchers, and if making music has an influence on it. In general, I’m fascinated about any cultural and social structure that humanity has generated. It’s exciting to analyse which traits of our consciousness, psyche or social behaviour are somehow affected by these structures. This certainly would also be the case for music and science.”

In the context in which you’re active, is it a common thing to meet people with passion for science & music? 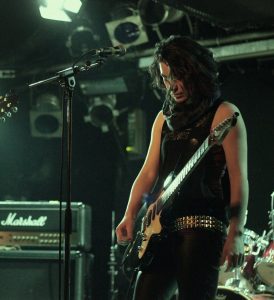 “I often meet researchers who also make music, yes. As the choice of making music or not is a very personal one, I am not able to say where this passion comes from. In some cases, as in mine, it might be due to how people are raised and educated. But aside of that, I am sure that there are tons of researchers who would love to make music, but simply cannot due to time constraints. If you are a full-time researcher with family, it is really hard if you want to pursue your music passion.”

From the very beginning, once Michela became a researcher, it was clear she wanted to preserve enough spare time to be able to continue her music path. “In fact, at some point I decided to reduce my working hours to 90% to improve my work-life balance. An important motivator for this choice was the wish to pursue my music passion further,” she says.

Finally, what advice you’d give to young scientists interested in music and young musicians interest in science?

“Follow your dreams and visions, as crazy as they might seem at the moment. I think that it is more important to follow the things that you personally care about most than what others tell you is important. Thinking out of the box is a tremendous way to find new ways to innovate, but also to advance your personal fulfilment.”

Michela personally believes that a self-fulfilled person is more capable of doing his or her job right. “Even if it seems hard, it is feasible with some patience and persistence. Look at the system and play with it; find a niche where you can pursue your own way. And if you recognise that music or science are the important thing that is missing in your life … dare to embrace it!”, she suggests.

The Avenger (LIVE at Mortesana Festival IT, 2016)

How can a scientist benefit from doing music on the side?

Agile Science #3: Xavier came up with Agile Research a decade ago
Scroll to top