Blog - Latest News
You are here: Home / Interviews / Catherine Allin: “Science and Music Are the Same Aspect of You Coming... 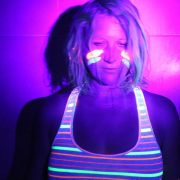 According to Catherine Allin, an astrophysicist from London, UK, being creative and open-minded are qualities that make up both successful scientists and musicians: ” I think the things that make me good at music, probably also make me good at science, e.g. thinking creatively and outside the box.”

Crastina’s Ahmed Adžemović got in touch with Catherine for an email interview.

Hi Catherine! Could you tell us about your early scientific and musical influences?
My first tape was a pirate of A-ha’s first album that my dad bought for me when we were on a holiday. Then I taped some of my dad’s music collection – The Best of The Police and The Eurythmics, and I would listen to them on loop on my walkman constantly. Absolutely loved (and still do) both bands. Then I got into grunge quite heavily, Nirvana, Smashing Pumpkins, Pearl Jam, and all those big bands. I also got very into the UK grunge scene, like Ned’s Atomic Dustbin and Senseless Things.

Science wise, I was a late bloomer. I was always fascinated by space, dinosaurs, and taking things apart and putting them back together. But academically I thought maths was ridiculous and so I refused to engage with it. We didn’t really do science in my first school either. I had to have maths tuition to go to my next school, and then from then on science and maths just came quite easily for me. I took a break from science after my degree, but eventually came back to it, I chose astronomy because I had always found it interesting. I have since realized that the things I enjoy about my work are similar to what I enjoy about music. They are both creative, and also I can become hundred-percent mentally immersed in them – music always, science sometimes when I’m in the zone.

How does the music affect your work and do you find it hard to balance the two?
I don’t know if music affects my work too much. I think it is hard to find a balance, because I work all day and then have to find the time and energy to do music in the evening. I think an academic life is complementary for a musician’s lifestyle in that I can be somewhat flexible in my work timings; very useful if I need to leave a bit early for a gig or similar. I guess doing gigs I maybe stay up later than I would which is stressful, so maybe sometimes I’m more tired than I would be, but then I think lots of people go out to the pub instead after work, so probably gigging is better than that as I won’t drink so much. I do find that, like with the gym, playing some music in a lunch break can free up the brain and maybe free it up to take new perspectives on problems.

If you would have to choose between the two, which would be harder to give up on?
Surely most people would say they’d give up ‘work’ if they could. Astronomy/Science or music though? I would be really sad to give up astronomy, but music would be literally impossible for me to give up, so it’s a no-brainer. I love my work, but I think I could find other work that ticked the same boxes.

As an astrophysicist and a musician, do you think music can teach us better communication? Is there something that involvement in music or perhaps arts in general could teach the scientists when it comes to communicating their research to the public?

I think music connects to our emotions. There is an emotional communication in music. I could see that scientists could use this to gain awareness of their own and other people’s emotions, and therefore become more empathetic – important for good communication I think. But this link is a little tenuous. I think that for me, performing music certainly helps me in performing in a science communication sense.

What would you advise young people working at the intersection of music and science?
I would say embrace them both and don’t see them as independent things, they are basically the same aspect of you coming out in different ways. I would also say to appreciate how lucky you are to have such a passion, this is something you will always have with you, no matter what else happens in life.

And finally, if you could hear the Universe play an instrument, which instrument would it be and why?
The Universe is massive, so I imagine it like a really, really long wave, so therefore a very deep note. If I could hear it play an instrument, I think it would play something like the sea organ in Zadar, Croatia. It is set in the esplanade there, you sit on it; and as the sea comes in, it pushes the air through the esplanade and makes a deep organ sound; different and equally beautiful with every wave.

Catherine about her research

“My research is centred around the quest to understand the first stars and galaxies. When the first stars and galaxies formed they emitted lots of high-energy radiation, the likes of which the Universe had not seen for 100 million years or more. This radiation changed the properties of the gas in the Universe, it heated the gas, and also ejected electrons from atoms, in doing so, over time it ‘re-ionised‘ the Universe. Hydrogen is the most abundant atom in the Universe, so we are aiming to use a signal that comes from un-ionised, or neutral, hydrogen to make maps at different times in the Universe’s history. I use simulations of the signal to explore different possible histories for our Universe and how they would look. In doing so, we will better understand what we eventually observe with the next generation of huge radio telescope, like the Square Kilometre Array.

My typical day consists mostly of programming, to either simulate or analyse data. I am often trying to gain insight into the results I see, so this involves creating ways to test my ideas and understanding. I generally try to go to the gym around lunch to take a break from sitting on a computer. It also helps to refresh the mind. There is lots of discussion with other researchers and PhD students, discussing new research papers and problems people are facing in their research.”

The song of plankton – “visualizing” big data as music

Sci Foo: intense intellectual, interdisciplinary interaction for influencer...
Scroll to top
We use cookies to ensure that we give you the best experience on our website. If you continue to use this site we will assume that you are happy with it.Ok