What’s your tactic for disseminating science concepts to children and others? For Celia Berrell of Science Rhymes the answer is obvious: “Adding poetry, rap or lyrics to your presentation can engage, entertain and educate!” So put on your poetry hat and perform!

Adding an appropriate segment of poetic seriousness or silliness can be a boost and a blast. Concerned some of your audience hasn’t grasped the essential principles of your topic? Stating the obvious in rhyme can provide a safe solution – as reiterating important points in a poetic manner can reach listeners that other information modes have left behind. A short burst of verse is engaging and non-threatening. Put on your poetical hat and become theatrical! Vary your volume, exaggerate gesture and pause. You will be adding energy and an element of surprise to your speech. A poetical interlude becomes a memorable milestone within your presentation landscape.

If you select someone else’s lyrics or poetry, it’s good to acknowledge them before embarking on their words. That way, you won’t detract from the take-home message at the end of your recital and anyone who recognises that author will be on-side from the beginning. (Sources of science poems are a bit sparse, but last year I discovered Sam Illingworth’s blog The Poetry of Science and he generously gave me permission to include The Veins of Mars on the Your Poems page of the Science Rhymes website.)

How about having a go at writing your own poetic pieces? It doesn’t need to be brilliant to back-up your talk – it could be a two-line rhyme that just nails your point. Get your creative engine revved-up with some science songs like Bjork’s Mutual Core. I grew up listening to Tom Lehrer’s The Elements which proves you CAN make science rhyme! And don’t forget Monty Python’s Galaxy Song packed full of facts and figures. 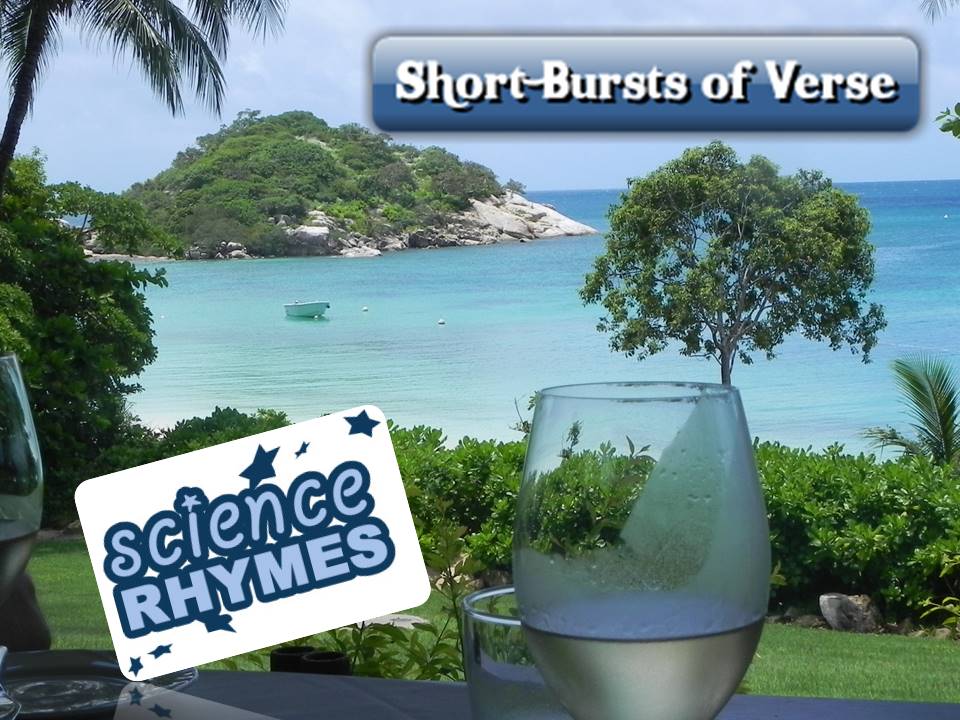 Since 2010 I’ve been mixing science with rhyme, sharing simple science concepts with upper primary school students (as well as their teachers and parents). My aims are:

Australia’s Commonwealth Science & Industry Research Organisation (CSIRO) publishes a children’s science magazine called Double Helix where they share one of my Science Rhymes in each issue (which is a fabulous honour). Back in tropical Cairns, one of my regular series of presentations is at Whitfield State School, combining science concepts with writing poems. Last year our focus was Flight, to accompany the Drones theme from Australia’s National Science Week, providing the perfect excuse to remind students about …

Newton was a clever man.
An avid scientific fan.
He questioned many things he saw. Like ones we had no answers for.

He thought them through right to their cores. Then gave us many handy laws.

Without a force of push or pull
an object will remain quite still.
With just one push at just one time that object moves in one straight line.

A bigger Force accelerates
an object that is heavy-weight.
While objects of a smaller mass
don’t need much Force to move them fast.

So Newton noticed they obey that Force will equal m times a.

Now bend a stick. Before it cracks you’ll feel its force of pushing back. For every action there will be
an equal one – opposingly.

Without his formulas in place we’d soon get lost in outer space. So Isaac’s Laws help us traverse the reaches of our universe.

This year, we’re collecting rhyming poems about WATER for the Science Rhymes website (to compliment the UN theme of Sustainable Tourism). So let your inner-child come out to play, because I’d love to hear from you too! (Email your poem to feedback@sciencerhymes.com.au).

as water colours-up our world …
and gives LIFE
to our place.

White for clouds that swirl around and icy poles that freeze;

and blue for lakes and rivers plus … our liquid
deep blue seas.

Celia briefly taught maths and science in England before escaping to Australia to see native kangaroos and the Great Barrier Reef. Since moving to Cairns in 2006, some of her poems have been internationally published in school English textbooks. She hones her presentation skills at Mt Sheridan Toastmasters Club and is a member of Tropical Writers and the Society of Children’s Book Writers & Illustrators. Currently, she’s preparing Science Rhymes Vol 2 to accompany her first book Celia Berrell’s Science Rhymes (also on Kindle).
February 10, 2017/0 Comments/by Celia Berrell
https://crastina.se/wp-content/uploads/2017/02/Square-image.jpg 720 720 Celia Berrell Celia Berrell2017-02-10 08:38:322017-08-02 11:33:23Short bursts of verse by Celia Berrell of Science Rhymes
0 replies

Break it Down: Refreshing Science Communication