Blog - Latest News
You are here: Home1 / Interviews2 / Science and Geek Culture: Dr Rodrigo Salvador and the Journal of Geek ... 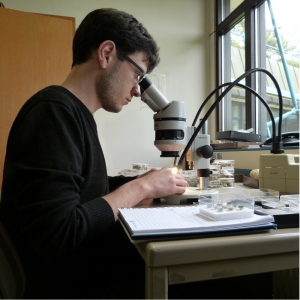 One of the most glass-shattering moments I’ve had during my undergraduate studies is when my lecturer told me that “scientists are people first”, after I was confused as to why some scientist in the news acted out of the norm. Nowadays, of course, it makes all the sense, scientists aren’t just factory robots pumping out research papers from their ivory towers. They are people, and people are defined by more than just their day jobs. In this Crastina theme of “Science and Subcultures” I thought it best to explore one of my own subcultures, geek culture.

So I called out to the editor-in-chief of the Journal of Geek Studies Dr Rodrgio Salvador, a biologist and paleontologist working as a curator of invertebrates at the Museum of New Zealand Te Papa Tongarewa to chat about science and geek culture.

This interview is summarized from a podcast discussion, you can find the full video or audio here.

Thank you for joining us to chat about science, scicomm and geek culture Rodrigo!

Thank you very much for having me and giving me the opportunity to chat!

How did you get into science and studying mollusks?

I liked biology as a kid and lost touch with it along the way but fell back in love with it at university. I decided to go on to do a master’s degree after undergrad, to try out research for myself and it just went well for me. Doing research means that you are always learning new things, always tackling different projects, working on your favorite topics. You are also working to increase global scientific knowledge, not just to make someone else richer.

I liked snails because of their cool calcium carbonate shells that fossilize easily. I began to realize that they were amazing animals, they’re biologically interesting, and can be fun and even cute sometimes. I fell in love with them and never stopped studying them since. 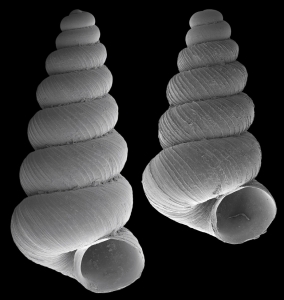 Radiodiscus ubtaoi, a land snail from the Atlantic Forest in Brazil, was named after Ubtao, the god of the jungle in the Forgotten Realms campaign setting of Dungeons & Dragons.

One of the most prominent projects you have undertaken for science communication and outreach is developing the Journal of Geek Studies. What is the journal about and how did it come about?

When we started, my wife and I were doing our PhDs in Europe, and we were just starting to become real scientists so to speak. We knew how important science communication was and we wanted to do it somehow. But we did not want to do more of the same things like science blogs about our own research or checklists of science things people should know about. We wanted to add a little extra to it, and to write about other interesting things that we also liked.

Eventually that brought back memories of discussions we had during Dungeons and Dragons sessions, to nerdy stuff from our childhood years. We wondered about things in fiction and how they correlated to the real world. So we decided to build a place where we could do that mix of science, communication, and nerd stuff. While also maintaining some degree of scientific rigor, you know, we wanted to apply real science to those problems. We also wanted to have a platform, not just for us, but one that would be open to everyone to contribute to. So eventually we ended up transforming that initial blog idea into an online magazine of sorts, and that was how the Journal of geek studies was born.

We call it journal to give it a more academic vibe, in a sense, and we ended up choosing our favorite Dungeons and Dragons monster as its symbol, the owlbear.

It is built like a scientific journal where you can submit articles, there needs to be some scientific methodology to it and referencing. While it’s not peer-reviewed, we do some quality-checking and edit articles to a journalistic standard. Anyone can submit if they have an interesting article about geek-related stuff with some scientific rigor. Some of my favorite articles include one about the Frankenstein novel and the themes of research ethics and the fear of science by the public which is an important topic to this day. There is also one about statistically analyzing the length of japanese light novel titles over the years, which I think is fun.

What are some of the similarities that exist between scientists and geeks?

I think it’s natural. There are a lot of scientists who are also geeks, or to be more accurate, people who were geeks before they became scientists. So in many cases, it was something like Star Trek, or Star Wars, or Indiana Jones that led people to become scientists in the first place.

At least in my personal experience, there is a sort of cut-off line of about 50 years old. So people over 50 will look at me and say, What? Why are you doing this thing? But people younger than that are more in touch with things like Star Trek or Lord of the Rings, you know, the classics, and more recently stuff like the MCU, Pokemon, and even very niche anime and Japanese RPGs.

So there are lots of people out there with different interests. Sometimes they just align, I think. You can also have it the other way around, that science is starting to be invaded by geek culture, in a sense. So for instance, if you look at the technical naming of things like names of species, or names of genes or molecules, you have lots of references to books or video games.

So there is a good overlap between the serious science and the geek realm, so to speak.

Yanas did his BSc and MSc Degrees at the University of KwaZulu-Natal and his PhD at Nelson Mandela University in South Africa where he is currently a postdoctoral researcher. He has generally worked in marine animal ecophysiology, testing the potential future impacts of environmental change on animal health, particularly the early life stages of fishes. He also founded a science communication media brand called Geekoscopy where he hosts podcasts, articles and videos on various social media platforms.
May 4, 2022/0 Comments/by Yanasivan Kisten
https://crastina.se/wp-content/uploads/2022/04/91883172_2366105047014435_8359499662310244352_n-1.jpg 500 1500 Yanasivan Kisten Yanasivan Kisten2022-05-04 11:01:102022-05-04 11:01:10Science and Geek Culture: Dr Rodrigo Salvador and the Journal of Geek Studies
0 replies

A scientist with the soul of a musician: Interview with Mats E. Eriksson