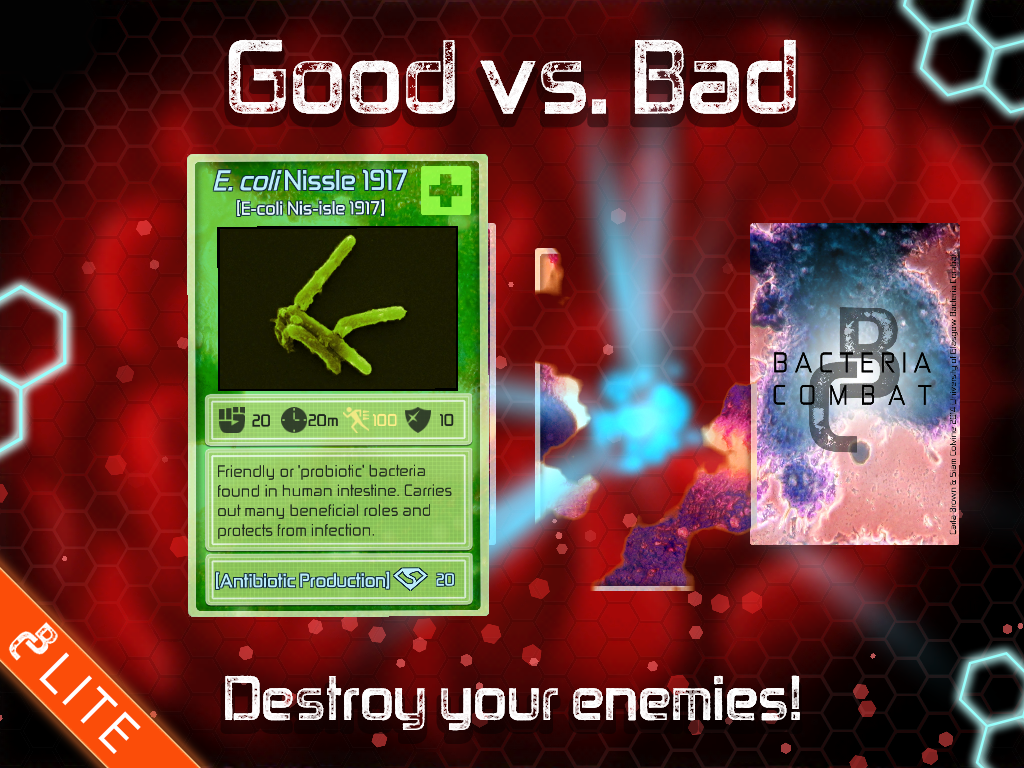 Bacteria Combat Lite is the first in a series of science games which will educate on bacteria and antibiotic resistance. This amazing science game was designed by real scientists working with real bacteria! All bacteria featured in the game can be found in the human body and special Joker cards represent the real challenges faced by our Bacteria champions.

Bacteria Combat was created by Carla Brown who runs her own company Games Dr. Carla is also a research Microbiologist at Glasgow University where she focused on the development of new antibiotics produced by bacteria themselves.

During her PhD, Carla became passionate about investigating fun ways to communicate the problem of antibiotic resistance to school classrooms. This lead to her producing her first game, Bacteria Combat in partnership with Future Fossil Studios. She also paired with Queen Mary University to produce Poo Racer, which provides children with a fun way to learn about their bowl flora. 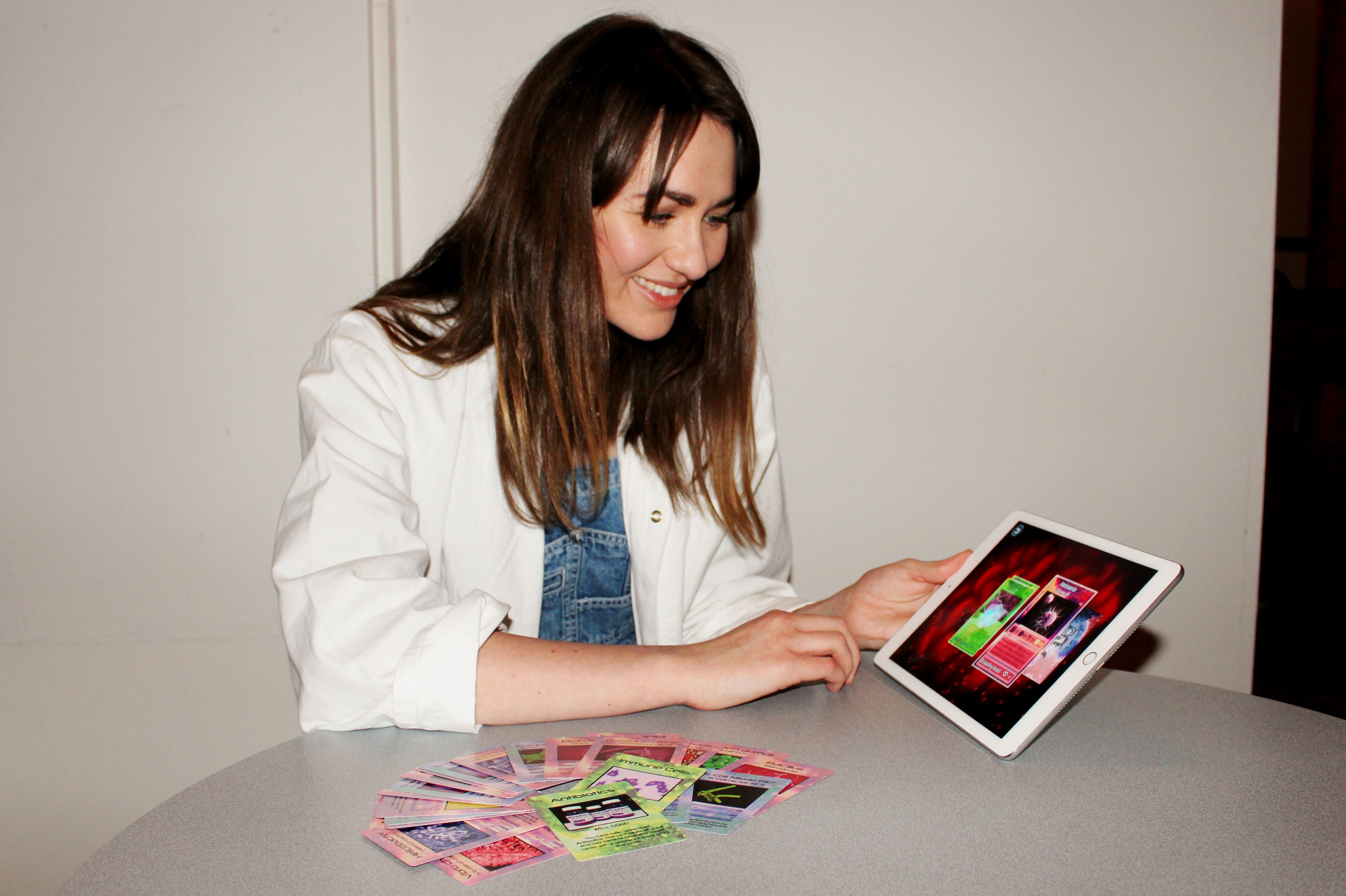 Hi, Carla! Bacteria are rather unusual theme for a game, why do you think it’s important to teach about them?

Bacteria are clearly a topic most people won’t discuss at length.

They are referred to as bugs, germs, microbes and are recognised as a ‘single entity’. However, bacteria are extremely important for human health. They are involved in the development of your immune system, development of your intestinal tract, digestion of food, protection from infection and more recently have been associated with neuronal function including stress and behaviour.

Being a microbiologist, I obviously adore bacteria and I appreciate that they play both beneficial and harmful roles in the body. I wanted to communicate this to the public and ultimately remove these inaccurate and overused terms such as ‘germ’.

An overly used statement is “there are more bacteria cells in your body than there are human cells.” And while this is true this does nothing to communicate the unique ‘bacterial fingerprint’ which exists in every human being. Your gut bacteria will defend and in some cases feed your body until the bitter end. They are a microbial organ and it’s time that society recognised their amazing and unique abilities.

Bacteria Combat showcases the unique ‘superpowers’ of different bacterial species and highlights their importance. Bacterial competition occurs almost everywhere in the human body and it is essential for the development of your unique bacterial populations.

Why did you choose creating mobile game and not any other? (e.g. board game).
So this is actually a really nice story. Bacteria Combat started off as a card game which I designed in the evenings with my designer friend Siam Colvine. All of the images in the game were real microscopy images taken by myself or my researcher friends. The card game, which was aimed at ages 9-14, was tested in around 10 schools across Scotland. During these sessions, I tested the game’s ability to educate on good and bad bacteria, antibiotic resistance and also remove negative germ connotations. It was also during these sessions that I surveyed pupil’s preference; to play Bacteria Combat as an app or a card game. Indeed, 75% of surveyed pupils stated that they would prefer the game as an app!

It was at this stage that I began to approach game developers and crash game design festivals!

Even now, I still encourage use of the card game. Different students prefer different methods of gamified learning and it is great to have different versions of the same game.

What in your opinion makes game a better mean to educate in terms of science?
When scientists are about to carry out a new experiment, which may take them anywhere between a day to a year, they manage their time so that they can regulate the rate that information is gathered. During my PhD, I done this every week. What’s the point in squeezing 87 experiments in to one day and being overloaded with data?

I think that games are also very good tools for doing this. The player can control how long they play the game, how hard the difficulty is. They can play the game alone or discuss the game with others. It’s a very dynamic process and it allows information to be received and reused during later game play. Due to individual scores and ‘levels’ academic progress and transfer of knowledge can also be mapped and evaluated.

Furthermore, games have the power to change perceptions and introduce important vocabulary which can be used through Higher Education. When running Bacteria Combat sessions in classrooms, I always leave 15 minutes for discussion post game play. It is during this time pupils will debate the success of the antibiotic card; the best bacteria character; the winning bacteria battle move; the special powers of good and bad bacteria. And really, is this not what microbiologists spend most of their lab meetings discussing?

We cannot ignore that we currently live in a digital society and our dependence on digital devices will inevitably increase. Therefore, to motivate pupils to learn, we must use methods which they recognise and feel comfortable with.

Do you think we should teach more through games?
Absolutely. I would not be pushing this idea if I didn’t think it could remarkably change our methods of education. To many, games are non-educational resources which distract from teaching. To these people I will say, you are using the wrong games. Educational games should promote discussion, ignite their imagination and allow pupils to be hyper and excited about the specific content in question. Success in a job results in celebration, screams down the hallways and a buzz that you can’t compare to anything else. Why can’t we bring this to school classrooms?

What are your further plans with development of this game?
The next few months are going to be very exciting! Future Fossil Studios and myself are currently developing a multiplayer version of Bacteria Combat which we hope will be used widely in school classrooms (can you imagine bacteria battles between different classes in schools?!). We will also be adding different levels to the game including the gut, skin and mouth. This will require a lot of testing and additional funding but hopefully my hard work is going to pay off! I have also teamed up with another developer company, Monocool Interactive, and we are currently working on a new science game… which I can’t talk too much about! Stay tuned for some more microbiology game madness.

My company has also expanded into film and media and we are currently developing a science film for young adults to educate on antibiotic resistance.

Are you a sufferer of PAC, The Pallas Athena Complex?

2 sides of a coin: differences between academic and SciComm conferences
Scroll to top