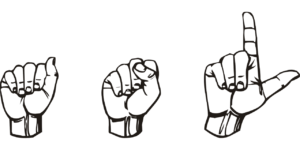 To complete our theme “Science and Sound”, it seemed appropriate to dig into the opposite side of the spectrum: communication in the absence of sound. In the absence, in fact, of both spoken or written words. As the title suggests, I would like to talk about the communication among deaf people and (deaf) scientists and why it is so important. So, how do you sign your science?

I am actually partly deaf: I have 65% hearing loss on my left ear, the right ear is perfectly good. How do I hear on my left side? As I like to explain to people, it is a bit like having a blanket over your ear: all the sounds are muffled, which is very practical to sleep but when you are a very shy kid, well, you master the fake “nodding understandably” very fast (ps. great method but careful, it can lead to a lot of awkward situations). But I digress. The real story was in 2000 when I entered high school. In the last week of the summer, I had an ear infection… IN MY GOOD EAR!! Meaning that I actually started high school almost completely deaf. It is already hard to start a school cycle but starting as a deaf person… is very hard. I was feeling very alone those first days. Hopefully, my parents had explained my situation and I got introduced to the two deaf girls in the school: one was completely deaf and the other was hard of hearing but could speak a bit. She basically took me under her wing for the couple of days I could not hear, playing with me, and had started to teach me some sign language. Then my hearing came back and I got back into my classes.

I had only a glimpse of how it really feels to be deaf: lonely and frustrating until someone takes the time to communicate with you in a way or another.

With the 2020 Covid pandemic and everyone wearing masks, I am thinking of the deaf people who can’t even read lips now. Why did I not pursue the learning of sign language? Why is it not taught to everyone? Well, let’s change that! Today I will introduce you to the world of sign language and the specificity of Science Communication in signs. 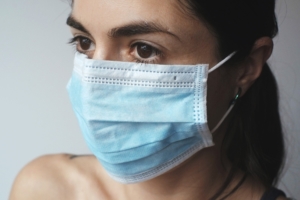 First of all, is sign language (SL) universal? Unfortunately, no: there are currently over 135 different sign languages! Even the English-speaking countries do not agree on one so now you have the American (ASL), British (BSL) and Australian Sign Language (Auslan).

Each national SL will have its own alphabet (see some examples here), grammar and specific sign for words. However, not all words will have a specific sign, and so will have to be “fingerspelled”, each letter spelt one by one.

Imagine having to explain a complex scientific topic in SL having to fingerspell almost every scientific vocabulary!! Way too long, right? Well, this is what deaf researchers have to endure! This is one of the many difficulties for them to deal with during their studies and their career.

Good news is that, in recent years, signing researchers took it upon themselves to invent STEM-specific signs. We will introduce you with the development of these new signs in the English-based SL, but because sign language is a visual language, it is likely that the newly made STEM sign will be used in every sign language around the world.

The Scottish Sensory Center is building a glossary of STEM British sign language (there is even an app!). The glossary is organised by field: Astronomy, Biology, Chemistry, Geography, Mathematics, Physics and then by subtopic. Each sign language is presented by a short video. They also provide a list of resources to learn BSL.

Thanks to the internet, anyone can now participate in growing the dictionary of STEM SL. Some examples of people working towards this are:

Here the interpreter Lydia Callis translates the summary of an article by Douglas Quenqua to ASL, explaining how new signs are being developed that may enhance scientific communication. She also introduces the ASL-STEM Forum, a platform where anyone can add its own creation of ASL sign in technical vocabulary.  Here the word is spelt first, then the new sign is demonstrated. The new signs are rated and commented on by the members.

Learning sign language is as hard as learning any other language. As such, you may be forgiven for not putting your science communication on hold until you master one of the many sign languages (even though you should definitely consider giving them a try!). However, it is important that we consider alternatives to make our science communication initiatives accessible to Deaf and hard of hearing people. When speaking to an audience always use a microphone (even if you think you don’t need one) and, if you can, try using a speech-to-text tool to give your talk live subtitles, for example. And because the path to inclusivity is always made through educating ourselves, here is some additional reading for you on understanding of Deaf people, the stigma, their identity and the particular impact of COVID-19 is having on their lives:

A huge thank to Nat das Neves Rodrigues Lopes for her editing work and for writing the conclusion of this article!

I have been a Science enthusiast all my life, but understanding the mechanism of the human mind was my real passion. How does the brain interpret the information from the body into a specific response? Which mechanism the brain submitted to a disease or an injury use to repair itself? However, I decided that my love for science did not bound me to Academic research. I want to help Scientists improve their communication and thus, bridge the gap between them and the public. It’s the best way to improve society!

A handful of podcast recommendations from the Crastina crew

Are we what we hear? A reflection on sound, identity and science communicat...
Scroll to top