This article is a part of Crastina’s theme ”Approaching the Disbelievers”, written by Dorota Paczesniak

Compared to the buzz around new iPhones or electric cars, innovations in food production don’t get people excited. Instead, many think of ”GMO” as something that should be avoided, if not banned. But the real question isn’t pro- or against “GMO”, but how we can have an inclusive, fact-based conversation about the future of food.

Words matter. Words frame the way we think, and shape our understanding of the world. If we create our mental models with scientifically accurate words, they will better reflect reality. If we use precise words we can have conversations about complex issues in a factual and rigorous way. “GMO” is an acronym of “genetically modified organism”, and it is used to refer to plants, animals or microorganisms produced through some methods of genetic engineering. “GMO” is not a scientific concept: it’s impossible to define,  imprecise and ambiguous.

“GMO” is not a scientific concept: it’s impossible to define,  imprecise and ambiguous.

Genetically engineered plants have been on the market for over 20 years, and the science regarding their safety is clear: research has repeatedly demonstrated1,2,3 that food produced with genetic engineering is as safe as when produced with conventional plant breeding technologies. However in the public eye “GMO” is not something you would like to eat. In the United States, a majority of the general public (57%) says that genetically modified foods are unsafe to eat, and only 37% consider such foods safe.  Pervasive anti-GMO activism is certainly responsible for shaping these views, but I will argue that the name “GMO” itself creates a bogus paradigm for understanding bioengineering, and biological science.

The dynamic nature of biology

Biological reality is one of universal change: all living organisms are being “genetically modified” from one generation to the next. At every cell division the genetic information encoded in DNA needs to be copied. This process is very accurate, but every now and then some errors (mutations) happen. In organisms that reproduce through sexual process the new generation is also genetically different than its parents: each offspring has a unique combination of their mother’s and father’s genes.

As such, genetic modification is ubiquitous to all life – it’s the fuel of biological evolution. Charles Darwin used the phrase “descent with modification” to refer to biological evolution. But the dynamic, evolving nature of biology is still inadequately present in public perception today, 160 years after the first publication of “On the Origin of Species”. About 30 percent of adults in the United States believe that humans and other animals have existed in the present form since the beginning of time. Many misconceptions about evolution are also common, for example that evolution only proceeds gradually and slowly, or that humans are not evolving anymore. With deficient understanding of the fundamentals of biology it is hard to expect more advanced knowledge of genetics, or specialized methods of bioengineering. Using the term “genetic modification” to mean “genetic engineering” doesn’t serve an educational purpose. Instead, it reinforces the incorrect mental model that only genetically engineered organisms are genetically different from their predecessors, while it is true for all living things.

Evolution at the Hand of Man

Domesticated plants and animals have been on humanity’s menu for at least 12 thousand years. Ancient farmers selected for certain desired characteristics in plants and animals, for example, plants with seeds that didn’t scatter before harvest time, or animals with low level of aggression. By doing so, they were changing the genetic make-up of these organisms.  Rather than “genetic modification”, we call this process selective breeding, or domestication. It has also been termed “Evolution at the Hand of Man” by Nikolai Vavilov, a prominent botanist and geneticist, whose research in the early 20th century identified centers of diversity of cultivated plants.

For most of its history, selective breeding relied solely on genetic diversity already present in natural plant populations and cultivated varieties. When the mutagenic effects of X-rays were discovered in 1926, the implications for plant breeding were immense. By using mutagenic agents new mutations can be induced at rates exceeding spontaneous genetic changes. Since the late 1940s, induced mutagenesis has been used to produce thousands of new varieties of crop plants, and it continues to be used in plant breeding today. Notably, mutagenesis is commonly considered a “conventional” breeding method, and it is subject to less stringent regulations than genetic engineering, despite the fact that the mode of action of the functional changes is unknown, and there is no control of the number and the effects of background mutations. 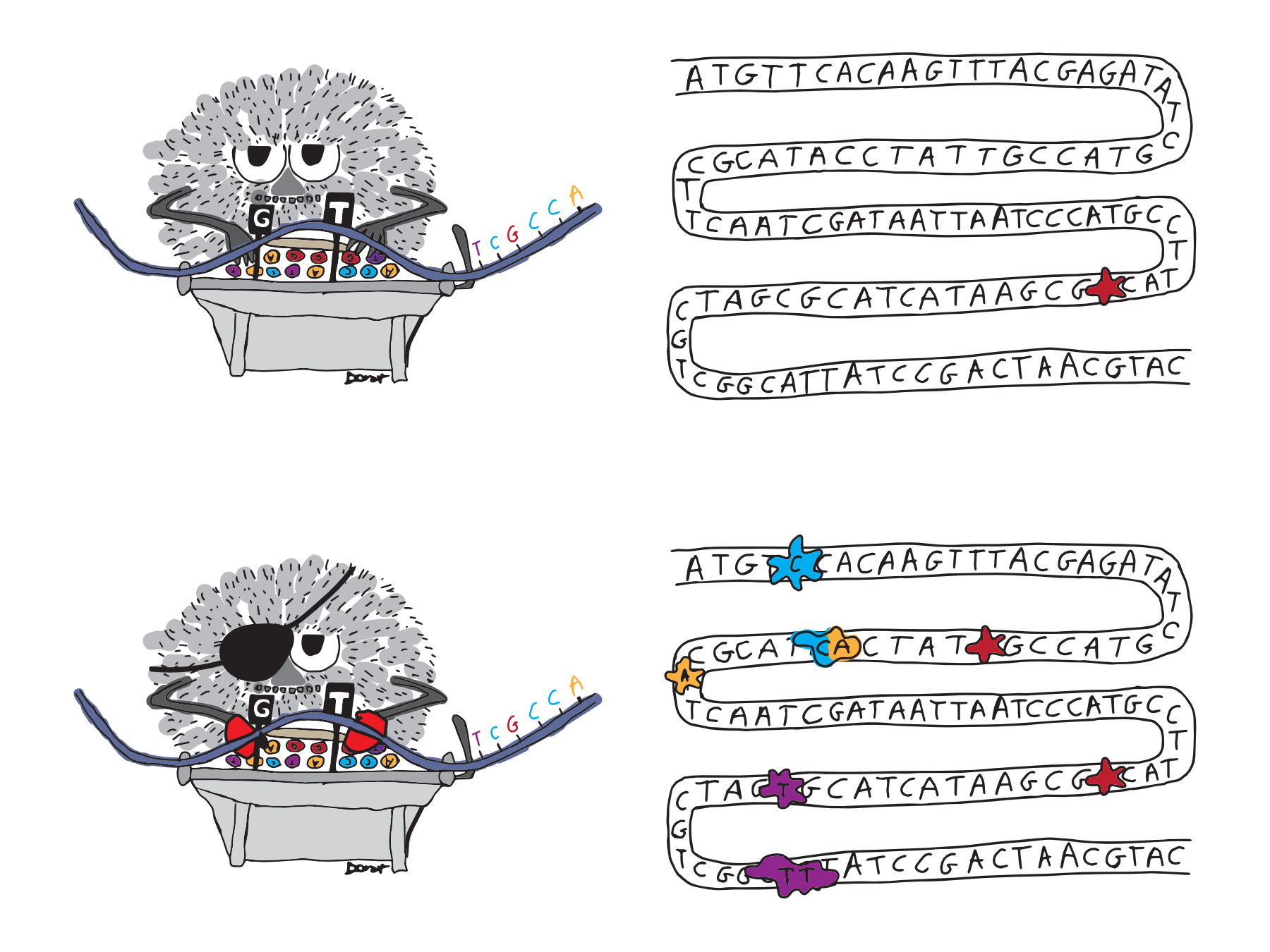 When DNA is copied inside a cell usually there’s very few mistakes (top). Mutagenesis is when we make the copying process more sloppy and more mutations happen (bottom). Mutagenesis in plants can be induced by e.g. ionizing radiation, or even by sending seeds into space! Illustration: Dorota Paczesniak

Genetic engineering entered the stage in 1973, when scientists first developed a method to cut out a gene from one organism and paste it into another. This provided a level of precision unattainable in plant breeding before: specific traits could be engineered by adding genes with a known function into genomes.

This copy-paste (transgenesis) technique has been followed by development of other methods, like gene silencing and many forms of gene editing (where DNA can be inserted, replaced or removed), like CRISPR. Crop plants have been engineered to be resistant  to insects, various diseases, and herbicides. Other traits include drought resistance, increased yield or nutritional enhancement (e.g. in Golden Rice, which contains a precursor of vitamin A).

These developments in modern plant breeding reflect the level of biological knowledge and technological advancement in biosciences today. They fit the definition of “engineering” because their developers use scientific principles (e.g. the knowledge about gene functions) to design and make them.

Science-based vocabulary for communication of biotechnology

The research and knowledge in biological sciences are advancing at a fast pace, which in turn stimulates development of new methods and technologies. It is in the public interest that these advancements are communicated truthfully and effectively, because they influence our decisions about food, medicine, and the environment. The American National Academies of Sciences, Engineering, and Medicine in their 2016 report  of genetically engineered products recommended individual assessments of products (not processes) for regulatory purposes. This type of regulatory framework is in place in Canada. There is no “GMO” in Canadian legislation. Instead they use a concept of “Plants with Novel Traits” (PNT) to evaluate safety for the consumers and the environment. If a plant has a trait that is new to Canadian environment it is evaluated as PNT regardless whether these traits were introduced with traditional crossing, mutagenesis or biotechnology. 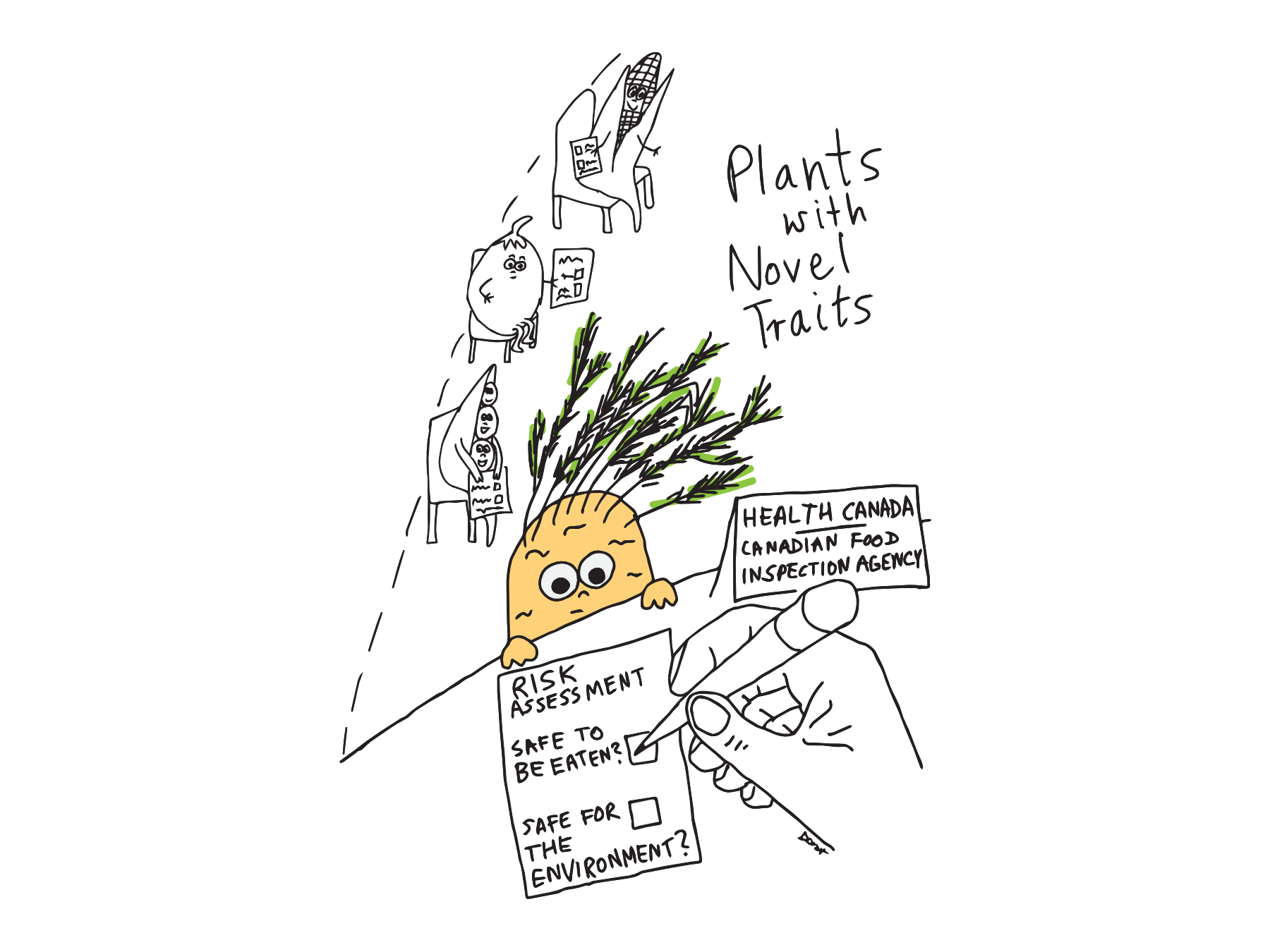 There is no “GMO” in Canadian legislation. Instead, a framework of “Plants with Novel Traits” (PNT) is used. Each plant is evaluated individually, regardless whether its new traits were introduced with traditional crossing, mutagenesis or biotechnology. Illustration: Dorota Paczesniak

There is hope that “GMO” is becoming a concept of the past also in the United States. After strong lobbying for mandatory labelling of genetically engineered products, U.S. Department of Agriculture (USDA) made a decision in 2018 to introduce the “Bioengineered” label. In terms of terminology, this is a step in the right direction. Notably, USDA also states that this label doesn’t convey information about the health, safety or environmental attributes of bioengineered vs non-bioengineered food, which emphasises its marketing purpose.

It is in the public interest that our technologies, especially those which relate to food, agriculture and environment are safe, and serve the public good, not special interests.

But how can we have a more inclusive public conversation about the future of food?

The first step is to use precise and scientifically accurate vocabulary. A commendable example of an initiative in bioscience communication, with a public interest in mind, came recently from Uganda. The National Agricultural Research Organization has developed vocabulary of scientific terms in simple English to improve communication about the biosciences. In the next step they are planning to translate these terms into other local languages. Their aim is to communicate scientific concepts more effectively to non-scientists, and to help journalists and science communicators to deliver the same message to all stakeholders.

We also need better public education in biological sciences. Biology education needs to use evolution as a framework, and not only treat it as another topic within biology. Evolution explains biological diversity at all levels of organization (genes, populations, species), and connects seemingly unrelated biological phenomena. It explains the relationships among wild and domesticated plants, why pesticide resistance develops, or why there will always be new pathogens and diseases.

So let’s take a step beyond “GMO”, and leave this concept in the past. By using vocabulary that is scientifically accurate, we can have more productive conversations, and design better solutions for safe and sustainable future of our food.

Dr Dorota Paczesniak is a biologist with research experience in plant reproductive biology in the context of agricultural biotechnology, and in eco-evolutionary dynamics in the context of natural populations. As an educator, she aims to increase the understanding of the dynamic nature of biological systems.

The author declares no conflict of interest. 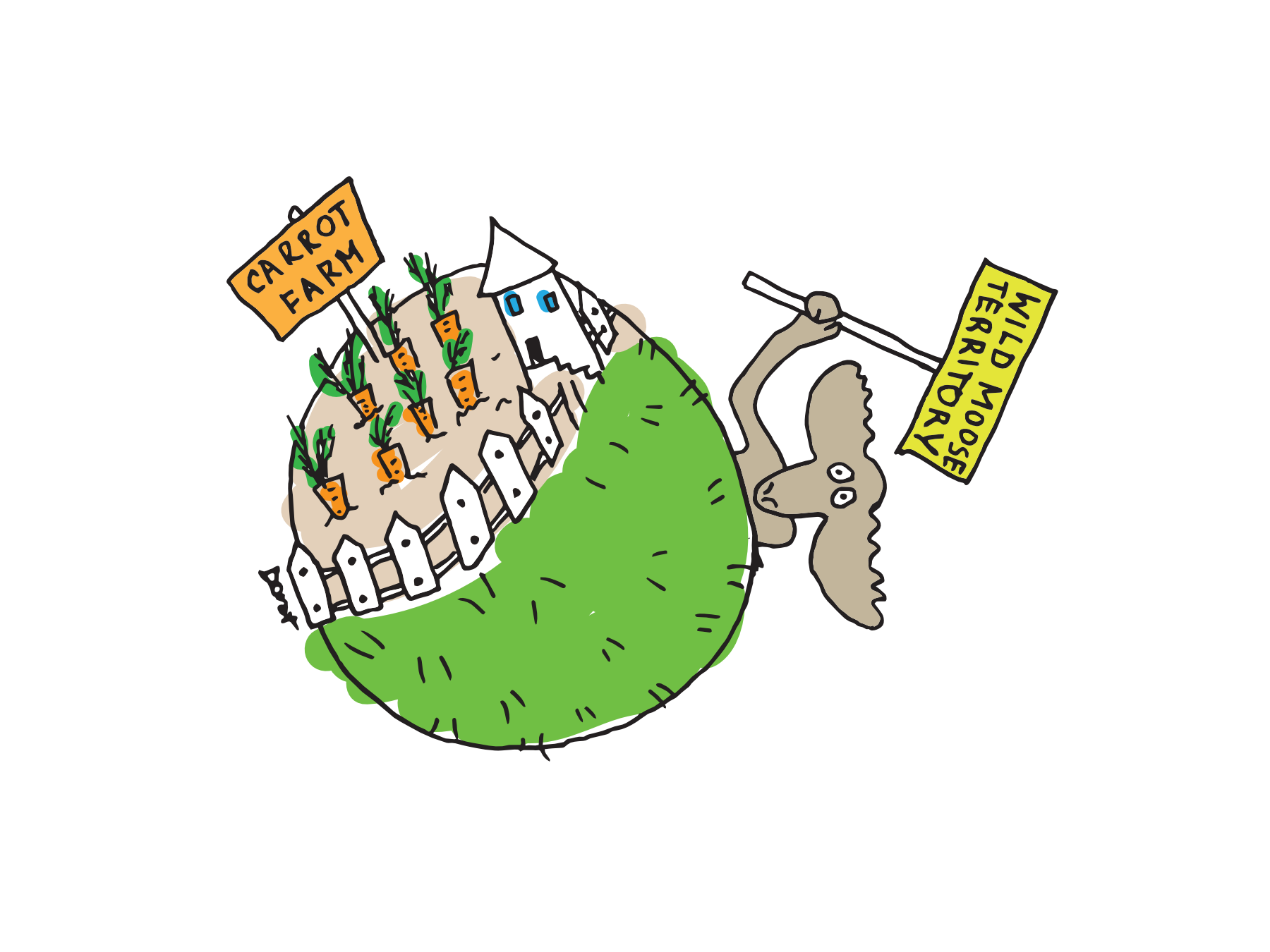 Innovations in agriculture are necessary, especially those that increase efficiency. We only have one planet, and apart from the space we use for farmland, we need to leave some space for wildlife (e.g. mooses and other creatures). Illustration: Dorota Paczesniak

I'm a biologist interested in diversity on various organization levels and the evolution of reproductive modes. As an educator my aim is to increase public understanding of the dynamic nature of biology. I'm an enthusiast of creative science communication, e.g. through words, games and art.
September 23, 2019/0 Comments/by Dorota Paczesniak, PhD
https://crastina.se/wp-content/uploads/2019/09/PNT_dp.png 1350 1800 Dorota Paczesniak, PhD Dorota Paczesniak, PhD2019-09-23 04:15:402020-07-24 16:21:17Let’s have a productive conversation about GMO – but first, stop saying “GMO”!
0 replies

Agile project management taught to students and researchers at Karolinska I...