Blog - Latest News
You are here: Home1 / Opinion & Reflection2 / Masters of illustration 1: Haeckel and “The Arts Forms of Nature”

Visual arts and science may have very little in common, but when the two connect, a new form of both may be created. One of the most stunning examples of this are the illustrations of Ernst Haeckel, German naturalist.

This is the first in a series of texts where Anastasiia Semenova, who studies genetics at the Kyiv National Taras Shevchenko University, portrays some of trailblazers of scientific illustration

Starting from Leeuwenhoek (1632–1723) and his primitive microscope, accurate depiction of the micro- and macroscopic worlds played a vital role in the development of biology, as well as medicine and many others disciplines. Before scientific photography development in the digital era, good hand-drawn illustrations and sketches were priceless to scholars who studied nature and medicine. Despite most of them being very technical, some illustrators went beyond a simple visual narrative and created something on a cross between scientific illustration and a work of art.

The German naturalist Ernst Haeckel (1834–1919) is known for his contributions to multiple sciences, among others being zoology and embryology. He himself described over a hundred different species with a focus on microscopic flora and fauna, and was also interested in the processes of individual development and evolution.

In his illustrated work Kunstformen der Natur (‘The Art Forms of Nature’) from 1904, Haeckel brought together science and art in the way that hadn’t been done before. Not only he described the species he himself have discovered, but also included vibrant illustrations of exotic specimen. The particular style of the illustrations and artistic mastery they were drawn with is impressive. 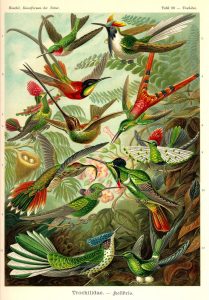 In his vivid images Haeckel explored flora and fauna, going from microscopic protozoa Radiolaria to mammals, providing skilful illustrations of a 100 groups of species of different habitats and continents. The way his subjects are arranged on the prints and how realistic they look is remarkable. It was more than scientific illustration of his work; it was an invitation to the wider audience to see more forms of life and be impressed by them. 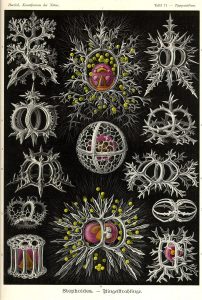 Indeed, his work was and still does attract and fascinate, as nature does. Haeckel wasn’t the first gifted illustrator – Leeuwenhoek, for instance, is still put in textbooks as only microphotographs are more detailed than his illustrations. But Haeckel’s fascination with nature and ability to depict its beauty turned his scientific illustration into art of an unusual form – we don’t see the nature through his own artistic perception, but with “common” eye, that only has to look to see nature and its beauty.

Talking science from the top of a soap box