Blog - Latest News
You are here: Home1 / Interviews2 / Public Engagement and Trust in Science: In Conversation with Dr. Farzana...

Public engagement is a term used by higher education institutions to refer to the collection of initiatives aimed at communicating their research with the public. The concept of public engagement is by no means defined by or limited to science related activities, but a significant amount of science communication happens in these events. I have long wondered if public engagement efforts in any way impact the public’s trust in science. For this interview, I asked Dr. Farzana Meru, an astrophysicist at the University of Warwick, what she thought.

During my years as an academic, I have been reflecting on how academia – more specifically universities, as centers of knowledge production – has an impact in the public’s perception of, and trust in, science. While a university scientist, I often wondered if people in the surrounding community knew about my work, if they understood what I did for a living: the questions I chose to ask, the methods I employ to answer them, and the conclusions I draw from my results. I always felt that the answer would be ‘no’. I never felt particularly connected to the public, and had to ask myself just how much the public would care about my work – and why should they?

As a result of these reflections, I have been drawn to the concept of public engagement. In my mind, public engagement is the space universities create to seek a connection with the communities that surround them, and the opportunity these institutions have to strike a relationship with the public at large. But do they? Are public engagement initiatives truly a space to foster meaningful, productive and genuine dialogue with their audiences, or are they isolated moments in time of academic entertainment? And who is the audience for these events? Are the people who the events are aimed at the ones that actually come through the door? How is impact measured? How is it understood? 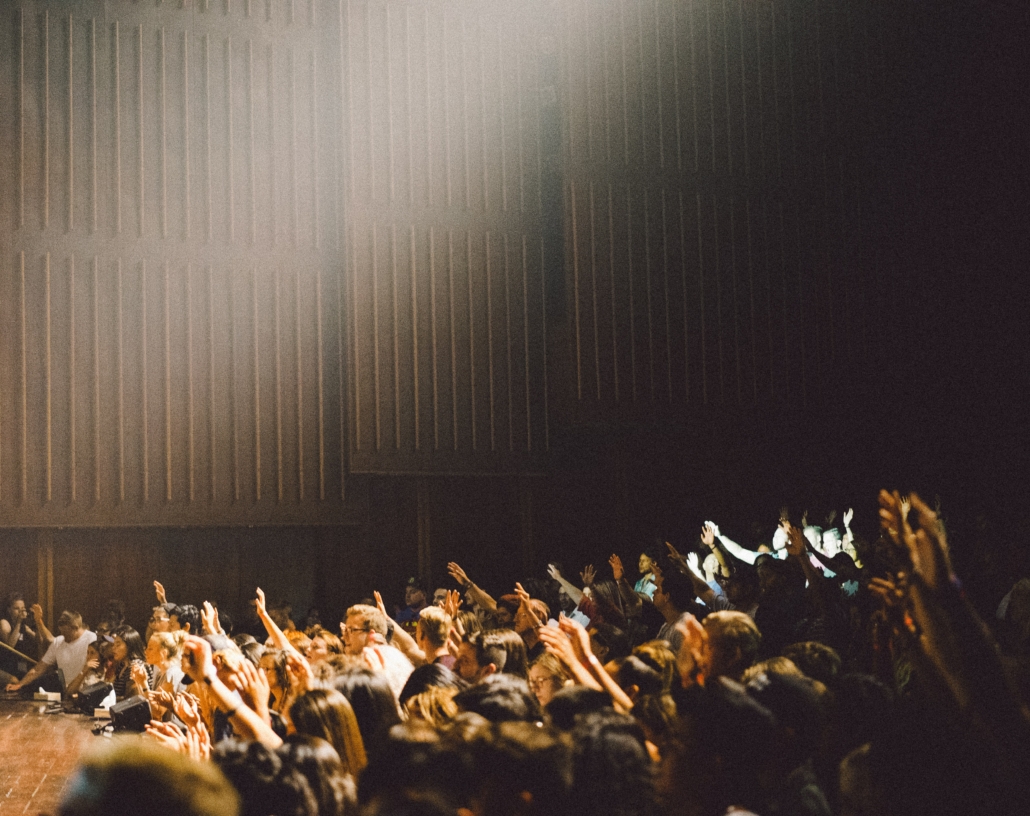 Photo by Edwin Andrade on Unsplash.

In my searches for inspiration in connecting Crastina’s ‘Science and Trust’ theme with public engagement, I came across a launch video for the Warwick Institute of Engagement of the University of Warwick in the United Kingdom. As part of the package of initiatives related to the Coventry City of Culture 2021, the Warwick Institute of Engagement emerges as a space and a team dedicated to ‘working with those outside academia to share research, collaborate on ideas, and make knowledge accessible to all’. In their webpage, the team goes further to say that engagement is also ‘about inviting in more voices, and being a role model for the next generation’. ‘Through [engagement]’, they continue, ‘both we and our audiences gain valuable interaction and dialogue – working together for a fairer society’. Even though trust is not explicitly mentioned at any point in this statement, I would argue that working with people, being role models to people, and interacting and dialoguing with people, cannot be achieved if said people do not trust you. The topics of trust and trustworthiness are, in my view, deeply connected to any public engagement efforts by any institution.

I wanted to discuss these ideas around public engagement and public trust a bit further, particularly in the context of science communication and trust in science, so I reached out to Dr. Farzana Meru, who is featured in the institute’s launch video. Dr. Meru tells me that, while she is not part of the team who created the Warwick Institute of Engagement, she has had extensive experience with public engagement. Dr. Meru is an astrophysicist at the University of Warwick studying the mechanisms by which planets are formed, and has brought her work to the public in a number of ways, both on campus and within her community. For example, she led the Global STEM festival, a worldwide celebration of STEM talent that enabled children to work on STEM projects with their parents at home and showcase them virtually. In addition, she delivered a talk in last year’s British Science Festival, participated in an astronomy-inspired art exhibition (with entries from the public), and led many more off campus events, such as science fairs and space camps. She was also part of a panel for the BBC’s The Sky at Night – Question Time program, and has written for the Sky at Night magazine, as well as being involved in producing a TV series about science and technology.

Pages of the ‘Astronomy Meets the Arts’ calendar, which was produced to showcase the work submitted as part of the competition and to fund raise on behalf of the charity Mind.

When we met to chat about public engagement, I asked her first of all what motivated her extensive work in this. ‘Because it opens people’s eyes’, Dr. Meru answered; ‘especially for children, these public engagement activities can show them a wide range of opportunities they may not have considered before, and inspire them to pursue such opportunities’. In what I find is an important point relating to people’s trust in scientific endeavor, Dr. Meru mentions the role of public engagement in helping to ‘connect what scientists do to what people really care about’. This was something I always struggled with myself: a sense that people may not care about what I do and therefore may not be interested in listening to what I have to say, in which case there would be no chance of a relationship, based on trust or otherwise. Dr. Meru is not discouraged by this, however, and goes on to tell me that ‘it is the job of a scientist to help people understand why science is important, and why their work is relevant to them. You have to start with the big picture, tell them about the key implications, the wider impact, and then dig deeper into the finer details of your work. When we say ‘impact’, it is likely that people will immediately think of an economic impact, but it is important that we talk about the societal impact as well, and about the value of exploration.’

I am then curious to know if she sees in public engagement the same connections to trust in science that I do. ‘Public engagement plays a huge role in people’s trust in science’, she tells me. ‘People need to know that decisions are being made based on real information, concrete facts that are not made up. And it is important that they see and experience those in a way that they can understand and appreciate.’ It was perhaps inevitable that the conversation would turn to Covid-19 at this point, images conjuring up in both our minds of debates on ‘following the science’ while governments navigate the pandemic. We are both acutely aware of how difficult communication has been, with information being produced and shared at neck-breaking speed, advice seemingly changing rapidly and often feeling contradictory to the public. One study is reported to say one thing in the morning, and by the afternoon there may be a report on a different study saying its exact opposite.

This rapidly moving situation may have created a sense of mistrust in science. How can something supposedly based on ‘facts’ be so contradictory, so uncertain? Dr. Meru speaks both her mind and mine: ‘the facts are the facts, of course, but there are differences in the details and the interpretation. When it comes to predictive models, for example, it can be difficult for people to accept why different models can predict such different outcomes, but, of course, that happens because each model takes different factors into consideration. It may not be a case of right or wrong, it could just be a case of considering different things.’ This nuance, however, may seem to the public to be in direct contradiction with a field of knowledge that prides itself on objectivity and always following the facts.

‘We need to be open about the intricacies and to be able to break the information down into the details’, Dr. Meru points out. ‘We need to be very clear, too – that is also very important.’ To me, this openness and clarity relates not only to the ‘facts’, but also to the uncertainty that is inherent to them, to the margin for interpretation Dr. Meru had mentioned earlier, to the fact that science is not a collection of ‘truths’ written in stone, but a fluid, ever changing flock of evidence that we need to navigate and make the best use of. The challenge, I believe, is to communicate to people how scientists navigate these nuances to reach a conclusion, and how reaching a consensus on a topic happens, and what that means.

Dealing with nuance is something that may come naturally to those who make a living out of navigating and interpreting science, but that is likely not the case for the public at large. ‘Scientists need to put themselves in their audience’s shoes.’ When I ask Dr. Meru what is the single biggest challenge that scientists face in trying to earn the public’s trust, she only needs a moment to think: ‘information overload’. ‘Information spreads like wildfire these days, and it is difficult to know how to deal with that, to know what is true and what isn’t. People don’t have time to sit and critically analyze the information. This is what we are battling with. I am not sure where the responsibility lies – perhaps not with scientists alone – but it is necessary to educate people on how to navigate all of this information. The public needs to be taught to be critical, but in a productive way. Learning to question their sources, learning what is a reputable source, is very important. We need to enlighten people on how they can tell if news is real or not.’

While this is, no doubt, a task of astronomical proportions, perhaps public engagement initiatives can play their role towards it. But what makes a public engagement activity any good? What turns a public engagement event from an entertaining moment in time into an opportunity for meaningful and genuine dialogue between scientists, experts, universities, institutions and the public? ‘It has to be two-way’, says Dr. Meru. ‘Indeed, public engagement activities could become tick box exercises, but what makes them successful is ensuring that people take with them what you said, and are thinking about it even after the event is over.’ Dr. Meru also suggests making use of interactivity and breaking away from a sage-on-the-stage delivery of science but, more importantly, shares some golden advice: ‘make people leave with a passion to know more. If you do, you are not making an impact in that one hour slot, but making long-lasting impact.’

Throughout our conversation, Dr. Meru excitedly told me about how she has seen people become inspired by science, inspired to continue down a science path, inspired to learn more about science. When they are asked to produce their own contributions, be it an astronomy-inspired art piece or a science project to demonstrate at a fair, people of all ages are keen, even excited, to hear and talk about science. It seems to me, then, that public engagement is, or should be, about much more than communicating facts, or even the interpretation of those facts. Perhaps what we ought to be aiming at with public engagement is inviting people – all people, not only the people who are naturally drawn to science – into a space of scientific co-creation. We need to have more existential discussions about what science is, what it is not, how it works and who it serves, and we need to be able and willing to take feedback and adapt to it. Perhaps the public can only be engaged with science, if the scientific community is engaged with the public.