The scientific publishing industry depends heavily on the people that write, review and edit scientific articles. In effect, these people have the power to shape the future  of scientific publishing. So, what will they make of it? Prof. Jean-Sébastien Caux, a strong believer in openness in scientific publishing, tells Crastina about how his own frustrations with the current system fueled his drive to change it. Prof. Caux is the founder of SciPost, a non-profit foundation whose mission is to provide publishing solutions serving the best interests of science and scientists, and which runs the SciPost.org two-way open access publication portal. 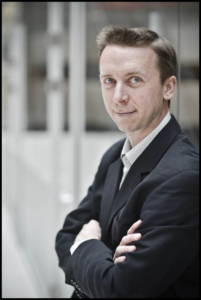 Thank you, Prof. Caux, for agreeing to answer some of Crastina’s questions! Would you tell us a little bit more about SciPost and how it started?

SciPost is a grassroots initiative whose mission is to build a next-generation academic publishing infrastructure, covering the needs of scientists worldwide. In particular, it aims at bringing control of academic publishing back into the hands of academics, implementing open accessibility and all its best practices, and providing an entirely not-for-profit infrastructure.

This initiative started in 2016 out of the growing dissatisfaction which I was personally feeling as an author, referee and editor. Having some coding skills, I set about building the site and approaching academic colleagues to join the initiative. The first publication appeared in September 2016, and SciPost now publishes at a rate of around 400 papers per year.

What is the big challenge or gap that SciPost is trying to address, and why is the SciPost format the right way to do that?

I would use the plural here, since SciPost tries to address a number of different challenges simultaneously:

i) To provide Genuine Open Access services to the community: The concept of “Open Access” has been stretched into many inappropriate directions by different actors with sometimes dubious intentions. SciPost wants to bring Open Access back to the essentials, as academics would view them: a community-owned, open infrastructure; copyright preserved by authors; open access to all contents, without any embargo, fees or hindrances; open metadata (citations, etc); no fees for authors, or any non-scientific block to having their work submitted for evaluation (scientific excellence being the prime evaluation criterion).

ii) To improve the utility and effectiveness of the editorial evaluation system: We use an open refereeing process whereby invited referees provide reports, but further experts can also contribute during the evaluation phase. Report contents are made openly accessible and are thus themselves scrutinized by the community, increasing quality expectations on all sides. This all leads to more stringent, useful and participatory evaluations, tapping into a much larger pool of expertise than closed-door workflows. This also allows to credit the crucial work of referees and include it in the academic publishing corpus (reports are made citable, even if the referee elects to remain anonymous).

iii) To remove the nefarious influence of profit-making from scientific publishing: The driving idea here is that peer review of academic manuscripts should be purely science-driven, and editorial decisions should be entirely decoupled from any financial/profitmaking distractions. SciPost enforces this very strictly. For example, we view the APC model (Article Processing Charge, i.e. payment upon publication) as fundamentally flawed due to its improper separation of editorial and financial concerns (just look at the epidemic of predatory journals which this model has created).

The basic idea behind SciPost’s business model is based on the notion that support for the initiative should come from academic institutions benefitting from its activities, primarily the universities to which authors are affiliated, and research funding agencies. What we do is compile, for each academic institution worldwide, the list of SciPost publications which they can be linked to. Organizations are then approached and queried (begged!) for support in the form of non-obligatory sponsorship in order to sustain our operations. The more successful SciPost is, the larger the economy for academic institutions.

How do the logistics of an open access, no charge journal such as SciPost work? Is the lack of a fee to publish in SciPost a sign that the authors or readers will have to compromise on some of the benefits of publishing in paid journals?

At SciPost, there is no question of any compromise on quality, on the contrary. Modern web development enables technically proficient experts to build tools which surpass traditional ones.

In doing this, SciPost demonstrates that a full, uncompromising-on-quality publishing service can be run for much lower costs than those propagated by legacy for-profit publishers.

Our estimates suggest the cost could be around 500 euros per paper.

In terms of logistics, the actual editorial evaluation, which represents the most important part of any publishing initiative, is done by the community, as is true for any publisher, even corporate for-profit ones. SciPost, as “publisher”, focuses on providing the tools to do this efficiently, and takes care of all related technical aspects such as hosting, checks, coordination, support and assistance, proofs production, publication and archiving, metadata registration. In fact, our metadata has been singled out as being the very best (number 1 out of 8670 publishers) in the whole publishing industry in a 2019 study. We have a small but brutally efficient team taking care of editorial administration, production, fundraising & sponsorships, communications etc. As somebody who loves coding, I personally take care of web development, deployment and maintenance of all our systems.

Do you think that the format followed by SciPost could be the future of scientific publishing? What are the main challenges to making that happen and how are you working to address those challenges to ensure SciPost keeps growing?

Yes, most certainly. In contrast to the currently available systems, I do believe that SciPost’s way of doing things is more mature academically on the editorial and publishing side: more open, and without a doubt much healthier and more affordable on the business side. Perhaps the two most critical challenges are, on the one hand, to expand the breadth of available journals, covering a more diverse palette of academic fields and, secondly, to ensure long-term sustainability in the form of robust, stable commitments from supporting academic institutions.

To address the first challenge, we are building on the good example of our by-now established operations in Physics. Following the template of our original flagship journal SciPost Physics, we are currently assembling Editorial Colleges and launching titles in fields such as Astronomy, Chemistry and Mathematics, as well as offering our infrastructure for use by academics in fields such as Political Science. The most severe challenge here is the one of reputation building, which takes a very long time. With community involvement however, this is really only a question of time.

With respect to the second challenge, we are spending a lot of time and effort getting in touch with academic institutions worldwide to familiarize them with our cost-slashing business model, emphasizing the great economies which could be achieved overall by its large-scale adoption. Patience is again of the essence here, because our model takes some getting used to, since it resolutely moves away from traditional subscription-type models or from the rapidly-spreading APC model which most people are more familiar with. The challenge for SciPost is somehow to get its message across to academic institutions and secure their support, in the middle of the money-syphoning cacophony created by corporate for-profit publishers’ seemingly limitless lobbying resources.

What advice would you give to others tying to initiate other projects like SciPost?

Brace yourselves, because the road ahead is long and hard. I don’t want to sound discouraging, but you have to be realistic. You will only get support once things are running, which means you have to build it first, without the required resources. You will have to push back patiently, but very hard, against ingrained conservatism within academia. You will not get much financial or technical support from academic institutions to get started, you will get very frustrated at metrics and recognition systems for taking geological timescales to recognize your journals, despite their quality, you will be scandalized by the high sums of money flowing to legacy publishers while new initiatives such as yours are bypassed in funding allocations.

Importantly, you will have to keep your motivation up by staying focused and by persevering even if you feel things are moving too slowly, because this is a much longer race than a simple marathon.

You will however magically replenish all your excitement and motivation from the occasional email out of the blue from an esteemed academic colleague, saying something like “keep up the good work, this is the right way to go, and what you’re doing is very important for our community”.

So just do it: it’s the right way to go, and it’s very important for the future of your academic community!

Jean-Sébastien Caux is Professor of Low-Dimensional Quantum Condensed Matter at the University of Amsterdam. His work focuses on applying advanced, nonperturbative theoretical methods to translate state-of-the-art mathematical concepts into concrete physical predictions for strongly-correlated systems in the fields of magnetism, cold atoms and quantum nanostructures.

After undergraduate studies in Montréal, he moved to Oxford as a Rhodes Scholar and obtained his doctorate in 1998. Following a postdoc at the University of British Columbia in Vancouver, he returned to Oxford as Postdoctoral Fellow in All Souls College, finally landing in Amsterdam in 2003. He is the recipient of (among others) the NWO Vici and ERC Advanced grants.