Professor Luke Drury is the former Head of the Astronomy and Astrophysics Section of the Dublin Institute for Advanced Studies. Alongside Professor Maria Baghramian from the School of Philosophy of University College Dublin, Professor Drury led an interdisciplinary project called ‘When Experts Disagree’. The project focused on understanding the implications of expert disagreement in policy making and in the formation of public opinion. I was curious to find out what connections the project may have unveiled between expert disagreement and public trust in science; here are Professor Drury’s thoughts on the topic. 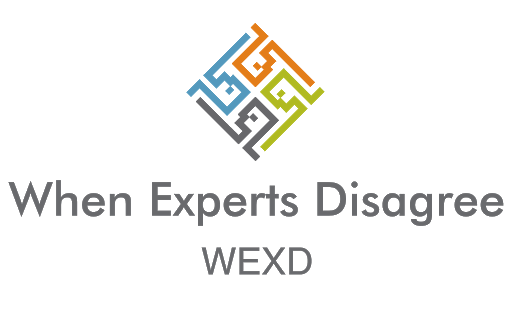 Thank you very much for accepting this interview, Prof. Drury. I wanted to ask you some questions specifically regarding the project you were involved in, ‘When Experts Disagree’. Does disagreement between scientific experts erode the public’s trust in science itself?

It shouldn’t.  But, as brilliantly exposed by Naomi Oreskes in her book “Merchants of Doubt”, people with ulterior motives always seek to exploit any hint of disagreement to undermine trust, not so much in science as in scientists (“they don’t really know”, “other scientists say”, etc). In reality, the fact that science is so self-critical and open about disagreement is precisely why we should trust it! 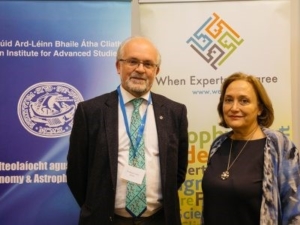 Prof. Luke Drury and Prof. Maria Baghramian at one of the WEXD meetings.

I think part of the problem is that most people have a simple and rather naive view of what “truth” is: they think of it as a binary issue, whereas science is much more nuanced. There are things of which we are very confident, there are aspects that are generally agreed, and at the edges there are always areas of disagreement. It is not about an absolute truth, but rather the best available synthesis of what we have discovered about nature to date. I do think we have a separate problem with the way the media, especially in the english-speaking world, tend to give “false equivalence” to what they perceive as two sides in a debate so that an isolated contrarian can appear as equal to a representative of the majority consensus.

Do you think the public understand, or are prepared to understand, the uncertainty that is associated with science? Does realising this level of uncertainty make people trust science less? How can we effectively communicate what uncertainty means with respect to what can and cannot be trusted?

I think the public are perfectly capable of understanding [that science is uncertain] if it is properly communicated and it is dangerous and insulting to think otherwise.

The last thing we should do is ask people to have blind faith in science because that will inevitably lead to disillusionment when the science changes, and in any case it is just the logical fallacy of appeal to authority. We should do in popular communication what we do in professional communication with our scientific peers: link each assertion to the evidence both for and against the idea and explain our reasoning. I accept that in highly technical areas this can be difficult, but we need to present science as an ongoing process and not a finished product.

It seems almost impossible not to connect ‘When Experts Disagree’ with the Covid pandemic. Almost every aspect of the pandemic, from understanding to treating the virus, managing the new normal, and everything in between and beyond, has been a controversy. Has the disagreement between experts been a problem? Should the public be shielded from these debates until a scientific consensus can be reached?

A lack of transparency can only lead to the erosion of trust and in any case we don’t have the luxury of time to retire into our ivory towers to seek a consensus.

One of the positives to come out of the Covid response has been that it has greatly accelerated the move to open science and a much faster and more responsive research system. Actually to my mind there has been remarkably little expert disagreement so far on the medical and scientific side; the response of political and economic experts is of course another matter.

As far as expert agreement goes, the Covid pandemic is very different from the topic of climate change, which the ‘When Experts Disagree’ project focuses on – there is a wide scientific consensus in that case. Yet people seem to be equally divided on both topics. How does expert disagreement play into the climate change debate, and how is it different to the dynamic we see with the pandemic?

I’m not sure that there is that much difference!  Of course, our knowledge of Covid is less developed than climate science, but the distressing thing is to see exactly the same tactics being deployed by those who see their social, political and economic worlds threatened if the science is taken seriously. Find a few high-profile contrarians, cherry-pick the evidence, amplify doubt way beyond what is reasonable, impute false motives to the scientists, suggest outlandish conspiracy theories, etc.

What do you think is the main challenge the science community faces today in attempting to communicate disagreement without losing people’s trust?

As I said above, I think the important thing is to try and convey how science works, and that an essential part of the scientific system is sceptical review by other scientists. If there were no disagreement among scientists, this would be a clear sign that ideas were not being challenged and tested. The very fact that scientists are prepared to openly disagree at the edges of their disciplines is why we should take the core findings of these disciplines so seriously.

Do you have any tips for early career scientists who may be considering embarking on their own science communication initiatives? How can they develop a trustworthy relationship with their audience?

Be honest above all else. Try and tell a personal story about how you came to your conclusions, the struggles and doubts you had, the evidence you had to analyse, and the criticisms and supports that you received from others. Try and engage with the concerns of your audience and find points of common ground.

We trust people we feel empathy with and with whom we can identify, so you need to establish an emotional connection with your audience and put them in a position where they are able to imagine themselves as scientists.

Get them to see science as a human activity done by emotional beings, but one firmly rooted in hard evidence won with difficulty from observation and experiment and tested by constant scepticism. It’s not enough to just convey “facts”, your audience needs to feel the joy of discovery, the hard slog to get reliable data, and what it is to be a scientist. Then, and only then, will they fully trust you.