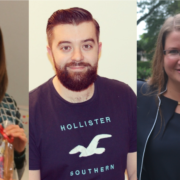 What possibilites can Agile offer in an academic setting? This is explored by a five-member teacher’s team at Brussels Engineering School, ECAM. Crastina had a chat with Benjamin Berger, Assistant Professor.

Introducing a modified Agile method for the students seemed like a step into the unknown for the teachers at ECAM. At the outset, the team members actually did not have a perfectly clear view of what Agile was. Some of them had a brief explanation in a management class some years ago, or during some presentation, but nothing more than that.
”To be honest, we did not really think it could be translated in an academic frame,” Benjamin says.

Benjamin Berger and his colleagues should, however, be convinced very soon that Agile could be useful for the students of ECAM. It started with a friend of Benjamin sharing a post on LinkedIn, talking about improving the way students worked in project from two researchers – who happened to be Laura and Marina of the forthcoming team. They were at the time exploring possibilities of Agile in academic world.
”We had been trying for years to improve the way students work on projects, trying to reduce their procrastination to avoid the end-of-semester rush,” says Benjamin. “I contacted Laura and Marina, and they convinced me very quickly to give it a try because it could address some problems we met.”

The current project is for 1st-year engineering students. Because of the large number or students (more or less 400), it seemed important for the team to implement the Agile Method.
“The subject is renewed every year but the goal is always the same: build a working prototype of a machine in link with the year’s theme,” Benjamin says.

The said theme can for example be an automatic dispenser, an aquaponic system, a ball launcher, an automated insect farm, or something similar. The goal is to use and develop hard skills like electronics, electricity, or mechanics on a practical project while working in teams.
“This will force them to learn collaboration, project management, and other soft skills that are sometimes forgotten in an academic context,” Benjamin says.

As there are a lot of students group to manage, the group received help from 4th-year students that are following a management class and have to apply what they learn in managing the students teams.
“We adopted an Agile-like method to fit our semesters and had to define the role of 1st-year students and the roles inside the groups, 4th-year students, and the role of teachers regarding the Agile method,” Benjamin says. “ We received some necessary help from Laura (big thanks to her!) in order to get what was essential in Agile methods and how to translate it into our project.”

How was the feedback from the students?
“I think the students did not really realize it was a new management method as they had never experienced one before. As it is the first project for them, it is difficult for them to evaluate the benefits of the method. For the 4th-year students who knew the project “without the Agile method”, we can say that they played the game by distributing the roles of Scrum Master etc. within their teams throughout the semester.”

What is your experience so far?
“I think students adopted the method quite easily and we could really see the improvements in the first two rushes we made with them before COVID19 put everything on hold. The work was better distributed during the first weeks of the projects and they had results faster than the years before. For example, the first rush closed on a cardboard prototype, helping them realize the dimensions of their prototype better than with a 3D view, making them see that assembly could cause some problems, etc.”

What are your plans – will you develop this further?
“We really can’t wait to try it again in January 2021, hoping this time there won’t be external elements influencing the project! Some of us will also try this method in other classes and projects.”

Music and Education
Scroll to top
We use cookies to ensure that we give you the best experience on our website. If you continue to use this site we will assume that you are happy with it.Ok