Science busking, in simple words, is expressing and ‘selling’ science on the streets, allowing passers-by to enjoy the beauty of science and scientific experiments at any time of day and anywhere. This sub-genre of scicomm is engaging and enjoyable, but it is also complex, as it takes effort to construct something that will make people stop whatever they are doing and listen.

We spoke to David Price – science busker and communicator at UK based science communication platform science made simple – to give us an insight into what science busking is like and why it is effective.

Hi David! Can you tell us a little bit about yourself? 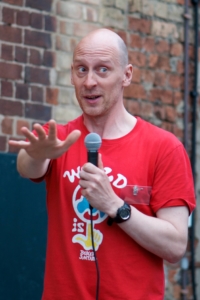 David Price lives in a little town called Westhoughton near Bolton in Lancashire. He loves fishing, walking and camping outdoors.

I started my career in science communication in 1998 as an exhibit builder for the Museum of Science and Industry in Manchester. But soon became far more interested in the public’s reactions than the exhibits!  So, I turned to building immersive shows and activities for the museum and ended up becoming the museum’s science outreach manager.

What incited your interest in science busking?

As a kid I loved watching street performers; mum and dad could hardly drag me away!

I won the professional development bursary award, from the British Interactive Group. This funded me to attend the 2009 World Street Performance Championships in Dublin with a brief to observe these performers who were so incredibly good at attracting, holding and inspiring audiences (to such an extent that audiences would put lots of money in the hat!).  Then publish my findings on how science communicators could use these devastatingly effective but still achievable skills.

The championships simply blew me away and really opened my eyes to the potential of science busking.  If a performer could attract over 2000 people to their pitch in little over 10 minutes on the pretext of preparing food with their feet that volunteers would shortly eat, then these skills had to be worth investigating!

What would you say is the most fulfilling part of your work as a science busker?

One of science busking’s great strengths is that it can rock up anywhere that the people are!  Visiting communities that would never attend a science event or festival, possibly seeing science as “not for them”.  Busking at its best listens to/asks/challenges such audiences to pick up our scientific world and run with it!

Watching the researchers and teachers that I train to take their science out onto the streets, make a difference and in so doing see the massive potential of busking skills is the most fulfilling part of my work as a science busker.

Stepping out onto a busking pitch feeling absolutely naked, but knowing humans find humans fascinating, give your audience a chance to see and interact with you through your material and they will not walk away (mostly!)

What is the most difficult?

Picking myself up when a busking funding bid does not get funding, trying to remember this is a process and not an end in itself (fail better next time)

But also: Stepping out onto a busking pitch feeling absolutely naked, but knowing humans find humans fascinating. Give your audience a chance to see and interact with you through your material and they will not walk away (mostly!)

Do you have a specific go-to trick to engage your audience?

If in doubt, play with phenomena, at the same time using your peripheral vision to look for anybody who looks at you.  Then count that look like an invitation to interact with them!

I love using the getting-a-mobile-phone-inside-a-balloon trick to gather audiences at the start of my routines. It has a lovely stem story to it and even if it is not related directly to the main subject of the routine,  its use is still very legitimate for me on the basis of “how can we hope to affect an audience unless we first have an audience”? 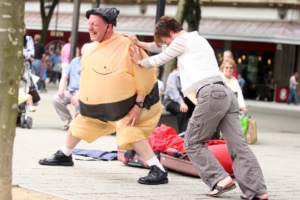 David Price dressed as a sumo wrestler as part of his science made simple busking session held in Vicoria Sqaure in Bolton. 04/07/09

What is your favourite memory from your years of experience science busking?

The wonderful, hospitable, fascinating and insightful people I have met along the way

The huge satisfaction of gaining, holding and interacting with a sizable crowd in a public space on a STEM subject.

Watching an amazing trainee science busker in Tromsö persuade two members of the public to attempt to levitate using only two inflated red balloons ?. The conversation between the busker and the audience that followed this interaction was a beautiful thing to witness, full of curiosity, wonder, and humour. This is the sort of interaction that at its best busking can foster and promote.

Do you think science communication methods such as science busking are effective? If so, how often?

I truly believe they are effective (can often be so). For me, it’s mostly about engendering positive emotional engagement with STEM (positive feelings linked to stem that last).

Science facts and accurate rigorous science are the right keys to informing our public. But so is empowering our material with inspirational and emotive messages to engage both the head and the heart.

Play with your material as much as you can and don’t stint on the time you spend thinking about that play, this so often proves to be time very well spent.

Ushashi is a third-year Biochemistry and Cell Biology student at Jacobs University Bremen, Germany. A writer and blogger on various platforms, she is passionate about science communication, journalism and bringing the science and arts closer together. She is also an amateur poet, an avid reader, and a pop-culture enthusiast!
March 4, 2020/0 Comments/by Ushashi Basu
https://crastina.se/wp-content/uploads/2020/03/20150509_120149068_iOS-scaled.jpg 1920 2560 Ushashi Basu Ushashi Basu2020-03-04 13:26:002020-04-28 02:32:18The Art of Scientific Performance: Science Busking with David Price
0 replies