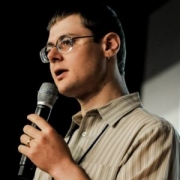 The increasing numbers of Science deniers in the population and political figures are a growing concern.  Many have tried to discuss climate change or vaccination but were confronted with closed eyes and ears (when the discussion did not escalate in a virulent argument).

Dr. Gleb Tsipursky has come up with a solution that allows you to talk to your science denier neighbor without arguing! (Here’s the short answer: yes you can!).

During an intriguing Skype interview, we discussed his work as a disaster avoidance expert, using the EGRIP strategy to talk to unbelievers and the truth-seeking pledge.

Dr. Gleb Tsipursky, a disaster avoidance expert, consultant, speaker, and best-selling author is the co-founder and Chief Science Officer of the Pro-Truth Pledge. He was a professor at Ohio State University’s Decision Sciences Collaborative. He juggled for a few years between his work in the University and his communication outside academia, talking to business leaders, training them to wise decision making. In 2018 he left his academic job to be a full-time consultant and author. His Amazon bestseller The Truth Seeker’s Handbook: A Science-Based Guide is a must-have.

How does one become a disaster avoidance expert?
I have a Ph.D. in the History of Behavioral Science where I studied the psychology of decision making in business and other contexts. I was a professor for 7 years at Ohio State University. I started to go outside of academia to train business leaders on how to make wise decisions. In 2018 I left academia to be a full-time science communicator.

What drove you toward this field of work?
I am passionate about the process of decision making. In my childhood, I could see my parents make bad decisions, and the conflict and suffering it created. I have seen the booming of online companies promising people that they will make money fast while these companies will quickly go bankrupt, bringing their customers with them. I was very frustrated to see all this suffering caused by bad decision making.

Business leaders are looking for safety and rational decision. I bring my expertise so they can make better decisions, mostly around people. I help them focus and what they want to achieve.

Let’s take an example. One of my clients was managing a conflict between two employees. One of them may have revealed sensitive information. My client was however not sure who was telling the truth. Her first thought was to confront her employee. I asked her about her long-term goals. She said that she wanted to save the company and her relation with her employee. A direct confrontation could have led to a defensive behavior or even to her employee leaving the company.

So the bottom line was that she had to think about the outcome with people and what to achieve: obtaining the truth or maintaining good company culture?

In your article in Scientific American: How to Talk to a Science Denier without Arguing you are using the EGRIP strategy, what does it stand for?
We tend to approach denier with argument and fact but most people don’t approve argument and fact! They feel attacked and feel that they need to become defensive.

The first approach is to question why these people denied reality. It could be many reasons. If you, for example, take climate change deniers, many feel that if they accept it, they automatically accept what the politics and economics consequence will be. Or it could be for religious reasons: God can’t do that. For both, it’s a cause of fear and anxiety.

Challenging your world view is a difficult situation!

You are the co-founder of the Pro-truth pledge on which you based our book: The Truth-Seeker’s Handbook: A Science-Based Guide.  What does it mean to pledge?

The Pro-Truth Pledge is a civic project to promote truthfulness and integrity for individuals, professionals, and leaders.
It’s a commitment to truth and a joint effort against bias. When you pledge, you are engaging yourself to:

How do you wish to see the future of scientific communication to be?

For now, scientists talks to scientists. The way academia is structured discourage scientist to be a public figure. They get criticized as wasting their time with the masses. I would love to see universities encouraging their scientists to be public figures and share their knowledge.

People in a position of power can make a change by changing the promotion to tenure. It’s doable and the people of power inside Universities should be whiling to it.

The new president of The EU Commission, Ursula Von Der Leyen is in charge of the money distribution.
A way toward with path would be to send an email to the EU Commission and ask her to do something to improve the communication of science.

A last word for our readers?

I encourage the readers to pledge and encourage even low efforts from scientists and politicians toward truth in a common movement against bias.

Let’s say that they fear that accepting climate change induces a worse economical life
Ok, then you would have to focus on their goals which here is the economy.

You have to show how you share the same goal: the fear of change of economic lifestyle. Create a link with them, you are on the same side, you are part of the same tribe.
People base their reactions on their emotions: are you part of my tribe or not?

Then you can provide information.

You challenge them to believe with facts that align with their reality: There is a large industrial push to turn climate change providing a huge new industry and so a lot of work to do toward green (good for the future economy).
It allows you to build-up on emotion with fact and it became easier for them to perform a shift toward your perspective.

Finally, you have to praise them for shifting their perspective, inducing a positive feeling to reinforce their new perspective.
Show that you are proud of them: “hey great that you can change and it’s a big strength!”

Find Gleb and his work here:

Let’s have a productive conversation about GMO – but first, stop saying...