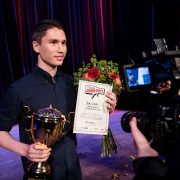 Forskar Grand Prix is a yearly event in Sweden where researchers are challenged to present their research in four minutes. To be a winner, your talk should be “captivating, inspiring and educational”. Peter Ueda from Karolinska Institutet showed that he mastered this – and got quite a bit of media coverage for a presentation with a very personal visual language.

From the website of Karolinska Institutet. Foto: Erik Cronberg

Tell me a little about your background and why you decided to compete in the Forskar Grand Prix competition.
I’m an intern physician at Södersjukhuset and researcher at Karolinska Institutet in Stockholm. I use large datasets and statistical methods to investigate health care related questions. The public relations office at Karolinska asked me to participate in Forskar Grand Prix, so I did.

What was your winning formula, according to yourself?
I outlined the presentation as a movie, where I narrated the story while showing pictures, over 50 of them, to support it. I tried to make the content and conclusions nuanced and scientific by not overselling the ideas while making the story of how we came up with the hypothesis and investigated it more entertaining. I tried to be entertaining without using hype or start-up-y pitching.

Tell me about your illustrations – are you an amateur artist, or is this something that you came up with for the talk?
I have always liked drawing but to call myself an artist would be a stretch. Some of the stick figures that I used were based on an internet meme, which I adjusted and integrated into my storyline. I like playing with the contrast between serious content (science) and silly and sarcastic pictures.

Please give three pieces of advice to the early career scientist who intends to take part in a lightning talk competition with talks aimed at a general public!

John Hinton: ”The science of music, and the music of science”

Randy McIntosh, neuroscientist: “I see parallels between the process of discovery...
Scroll to top