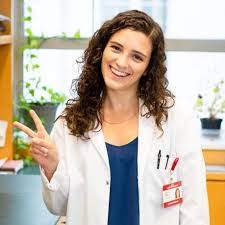 Did you ever have a professor, making jokes during lectures and you felt like you understood and learned better in this course than with the monotone and boring professor? Did you ever ask yourself if science and comedy could mix together? Do YOU want to learn AND laugh at the same time?

If you have a majority of yes or no, you should read this interview!

Dr Shannon Odell is a writer, a comedian and a scientist living in New York City. She just obtained her PhD in Neuroscience (December 2019) at Weill Cornell Medicine, where she studied epigenetics and memory.

She is the perfect balance of Science and Comedy.

She talked to us about her path and how she combined her two passions into multiple successful projects, how she could develop these projects during her PhD and how she envisages her post-PhD future as a Scientific comedian. 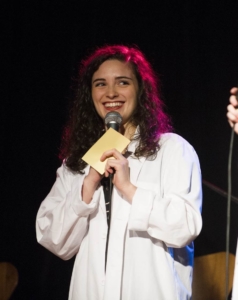 “ worse case scenario, if the audience doesn’t laugh at one of my shows I can at least say, well maybe they learned something”

When and how did your Comedy and Science world come together- in which context?

After completing my undergraduate degree in 2012 from Vassar College, I decided to move to New York, where I took my first job as a research technician in a neuroscience lab. Shortly after, I began “experimenting” with comedy, completing my improv training at the Upright Citizens Brigade theater. My love of comedy grew from there as I began writing sketch and characters and performing standup.

In 2014 I began my PhD program at Weill Cornell but knew I loved comedy too much to give it up. That is when I began to incorporate a lot of science into my comedy. I started hosting the live show, Drunk Science, in 2015 with my friends, comedians Joanna Rothkopf, Jordan Mendoza, and Ernest Myers.

In 2018 I began working with Inverse on my science series, Your Brain on Blank. I found that comedy was a great tool in communicating science, as well as a great tool for producing comedy. I like to think that comedy really just boils down to taking observations about the world, and sharing it with an audience, and at its core science is the same thing. They actually complement each other quite well. Also, worse case scenario, if the audience doesn’t laugh at one of my shows I can at least say, well maybe they learned something : )

I think anyone pursuing their PhD can identify with the idea that the science you study slowly stars bleeding into your entire life. It’s hard for it not to. PhD consume SO much of your time and mental energy, soon it can feel like everything is science. (For example, I remember after a particularly rough couple of days cell counting under a microscope, I began seeing cells when I closed my eyes, as well as in the floor tiles and wallpaper).

Likewise, it felt natural to start talking about my experience as a scientist in my standup, as well as using science itself as a basis for my material.

You co-created as well as writes and present the Inverse original series Your Brain on [Blank]. How did this collaboration start?

In 2017 I first had the opportunity to work with Inverse in their series, Big Ideas with Little Kids. In that show, I had the opportunity to explain to a panel of children, ages 6-8 about a big idea (I chose DNA) using a series of experiments. I had met several of the producers there from performing comedy. The shoot was a ton of fun, and as the producers new I hosted a show called Drunk Science, they asked if I would be interested in shooting another video where I explained how alcohol affected the brain while drinking myself. I was immediately down. The video was released as a stand-alone on Facebook, and to all of our surprise was very successful. I think I remember a week in seeing that it hit 5 million views and was blown away. I think currently it has something like 30 million views? Really wild.

From there they asked if I was interested in expanding it into a full series, where I sit in various situations (like a coffee shot throwing back caffeine, to a couch filled with puppies) and explain what was happening to my brain. I think in total we have created 12 episodes in addition to some extra content, and the page has something like 400K followers and 75 million views. It was really exciting because it lets me know that this idea, of using comedy to explain science, was something that people would get behind.

I had so much fun creating that series, and I credit the success of the series to the producers Rollie Williams and Stephen Ward who were so smart and creative in putting it together.

You host a monthly live show, Drunk Science, a live show where you compete to present the best scientific dissertation to a panel of real scientists while Drunk. It sounds like a funnier version of a committee meeting; does it feel that way?

Yes that is a fun way to put it! A MUCH more fun version. Our show is structured in that the first half the show is just an interview with the scientists. We like these interviews to feel like a casual chat between friends and try to foster an environment where no question is too “dumb” to ask and where conversations can quickly move from “how do scientists study primate social behavior” to the scientist telling a funny story about pooping in the rainforest. The comedians come equipped with really funny presentations on the scientific topics we give them. These can range from a retelling of the Wikipedia page, to powerpoints, to original songs and characters.

What I love about the shows is that the science becomes casual and conversational- we have comedians and audience members there to feel free to ask any type of questions, and scientist there to help us through the science. I think it is a great balance. Also- we drink haha

In your podcast “THE SCIENCE OF SELF-CARE”, you try different methods of self-care from wine to cupping and explain the science behind. What is your preferred method?

This podcast has been so fun to make as I myself, am very bad at prioritizing self-care. My cohosts on the other hand, comedians Steven Polletta and Sophie Yalkezian are so in touch with self-care practices and culture that I feel like even though I am covering the science, I am learning so much from them about making sure self-care is a part of my life.

My favorite episodes we did are on sleep and the episode on CBD (because I could really dig into the neuroscience behind these topics), but I would say I was most blown away by the science in our nature episode. Long story short: I need to take more walks in the park!

And you did all that during your PhD! (Very impressive!) How did you manage to balance all your activities in parallel to your lab work? (any advice for our readers?)

Like I said earlier, I knew entering my PhD program that I did not want to drop comedy from my life and so I made it a real priority. I was lucky in that I was already doing comedy in the city when I started grad school, as I think sometimes it is easier to maintain hobbies/ side-gigs when entering grad school than starting them while there. I also felt like science comedy and science communication was what I wanted in a future career- so doing all these shows/gigs was just as important as my lab work in furthering my career.

My advice would be if something is important to you in graduate school, make it a priority yourself- no one is ever going to give you permission to do it- you have to just make the choice and stick with it. There are a lot of opinions on how much “time” you need to spend in lab/ how much of personal life you are “allowed” to have while in graduate school but I think all that talk is really harmful.

You have to do what is right for you- and for me, that meant keeping up with my comedy and science communication.

What are your plans for the future?

Okay wow now time for the TOUGH QUESTIONS!! Haha, just kidding. As of now, I am looking to take some time to explore my options (figure out how health insurance works). My goal would be to work as a science host/comedian/communicator full time.

I have a partnership I am currently working with to create some new science videos- and I can’t wait to share those (It’s a secret for now!).  I think the dream would be to create my own science TV show- something funny, relatable, silly, lighthearted and down to earth. I think science deserves that.

Communicate science in a way that you find interesting. There isn’t one way to communicate science. In order to reach new audiences, we need to find new forms of outreach so, be true to your voice and do you!

Find Shannon and her work here:

I have been a Science enthusiast all my life, but understanding the mechanism of the human mind was my real passion. How does the brain interpret the information from the body into a specific response? Which mechanism the brain submitted to a disease or an injury use to repair itself? However, I decided that my love for science did not bound me to Academic research. I want to help Scientists improve their communication and thus, bridge the gap between them and the public. It’s the best way to improve society!
January 22, 2020/0 Comments/by Lauriane Nallet Khosrofian
https://crastina.se/wp-content/uploads/2020/01/shannon.jpg 225 225 Lauriane Nallet Khosrofian Lauriane Nallet Khosrofian2020-01-22 14:21:532020-04-28 02:36:24Dr Shannon Odell – The perfect balance of Science and Comedy
0 replies

The Coolest Science Merchandise of 2019