Blog - Latest News
You are here: Home1 / Interviews2 / Anna Ajduk, brain circulator: “One of the key words in present-day science i...

Anna Ajduk, reproductive biologist, decided to move back to Poland after some very successful years in the UK. Forming her own research group at the University of Warsaw, she represents the professional repatriation movement which has been referred to ”brain circulation”.

In June, Joanna Bagniewska wrote in The Crastina Column about Turning Brain Drain into Brain Circulation: ”Hopefully, we will soon witness a move from the source-sink model to a more bi-directional, horizontal exchange of ideas.” 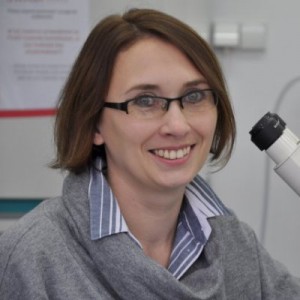 Anna Ajduk works on mechanisms of fertilization and preimplantation development of mouse (a model mammal) and on new non-invasive methods of assessing developmental potential of mammalian embryos. “This latter part of my research may be potentially useful for optimizing procedures of embryo selection in IVF clinics,” she says.

In this process, Anna Ajduk is one of the trailblazers. As a biologist specializing in reproductive and developmental biology of mammals she today leads a research group at her alma mater, University of Warsaw. After recieving her PdD in 2007, she spent three years to do her post-doctoral training in Wellcome Trust/Cancer Research UK Gurdon Institute, University of Cambridge, UK. But then she decided to return and start her own research. – the details are described in the box below.

Since 2012 Anna Ajduk have been actively participating in actions of the Association of Foundation for Polish Science Scholars  and organizing scientific conferences facilitating interdisciplinary networking between scientists (so called Inter-Mixes).

”This has given me a lot of fun and positive energy!” she says. “This year together with the Association I also co-organized Polish Scientific Networks conference aiming at creating a network between scientists in Poland and Polish scientists abroad and promoting ‘brain circulation’ instead of ‘brain drain’. It was a great event especially for young researchers currently working/studying abroad but considering returning home in order to continue their career.”

How have you used communication in a strategic way to create opportunities?
I think that one of the key words in a present-day science is networking. It is extremely important to meet people and talk to them, and not to limit your contacts to scientists from the same discipline. Often the best ideas come from discussions with people working in completely different fields.

Sometimes these ideas can be turned into money, as it happened to me: I met physicists interested in novel optical methods and we wrote together a grant proposal for establishing a new method to visualise cytoplasmic dynamics inside cells (oocytes, embryos). The proposal has been financed and our results are very promising. And, as a bonus, I had to brush up my knowledge of physics.

This experience convinced me that trans-disciplinary communication is valuable, so I became engaged in a project called Inter-Mix, i.e. a series of annual interdisciplinary conferences that facilitate communication between scientists working in different disciplines but interested in interdisciplinary collaboration. Each year we gather 100 researchers: biologists, physicists, chemists, mathematicians, engineers, representatives of liberal arts and social sciences, who can present their work (in a way that is understandable for a non-specialist), discuss it and look for potential collaborators. From what I have heard from the participants, they find it very useful. And since the meetings are quite informal, they have a good fun, too.”

Give three pieces of advice to the post-docs who want to practice ”brain circulation”!

• First, I do not think that coming back home immediately after a PhD abroad, at least in life sciences, is a good idea. It is better to get some more professional experience first, do one or two post-docs, and come back when you feel ready to apply for your own funds and run your research independently.

• Secondly, keep in touch with people you have met at different points of your professional life. Stay in contact with your previous mentors and PIs, collaborate with them if possible. Their advice and experience may be priceless in your future career. Remember about your lab-mates. Now they are just PhD students or post-docs, but in 5-10 years many of them become group leaders and your potential collaborators.

• Last, but not least, create your own network of people passionate about science. When you work in a buzzling scientific hub, like Cambridge or Oxford, you are surrounded by enthusiastic scientists who love what they do (sometimes they curse their job, but nevertheless they still love it). And they keep your internal battery charged. But not everywhere it is the same. When you decide to come back home, perhaps to an institution with a less vivid scientific life, your battery may become flat very quickly. You will learn that not every person working in science is passionate about it. Many are bored and frustrated. And if they are a majority, they may suck your enthusiasm out of you. Therefore you need a protective network of science enthusiasts to keep your spirits up. They do not have to work in your discipline. They do not have to work on the same campus or even in the same city as you, but keep in touch with them and meet them from time to time to have your battery recharged. I found my protective network in the Association of the Foundation for Polish Science Scholars. Our meetings are always a good fun and a great inspiration for me.

Anna Ajduk about her decision to move back to Poland

“After 3 years of post-doctoral training in the University of Cambridge, which was a wonderful and satisfying, but also very intense and, let’s be honest, exhausting time of my life, I came to the point that I wanted to change something in my life.

I was considering doing another post-doc somewhere else or becoming independent. My connection to the University of Warsaw has never been severed and I was still formally employed there (I was on an unpaid scientific leave). And then, I was informed by the University of Warsaw that if I plan to come back, it would be a good time to do it now, otherwise they would not prolong my contract. So I decided to come back and start my own research.

I decided that if I got funding for my scientific project (it was about the effects of aging on the quality of mammalian oocytes) then I will stay, if not – I would come back to post-doc’ing. Luckily, I got the grant, then another one and another, and I got sucked in J .

Initially, I believed that a group leader has more work-life balance than a post-doc. That was completely naïve. You may think that you have to muliti-task when you are a post-doc, but becoming independent rises multi-tasking to a completely new level. I discovered that there is much more to research than doing experiments, one needs to get funding, report grants, write papers, look after one’s students and their experiments, etc. And, since I work at the University, there is teaching as well. But I do not regret. I like challenges and my work provides me with them on daily basis. For sure, it is not boring!”

Time to enter the 2015 Dance Your Ph.D. Contest

The Slow Death of the University Seminar (David Schultz, August 2015)
Scroll to top