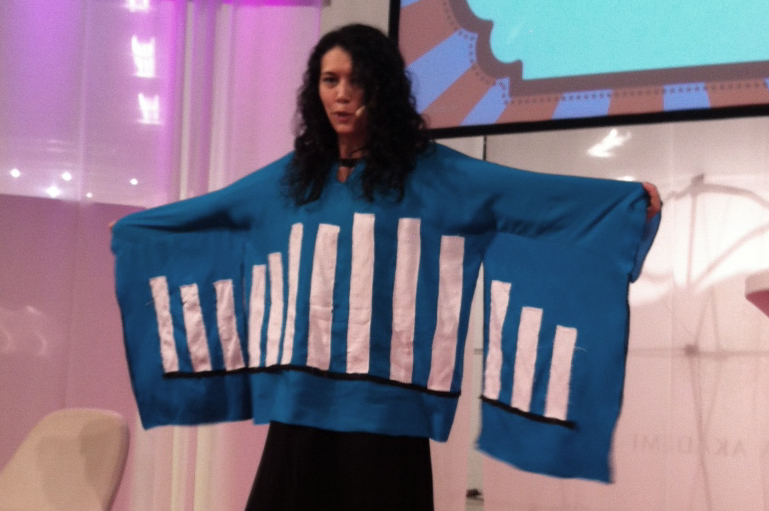 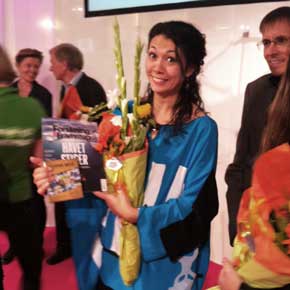 ”Well-dressed and witty” – this was how Cecilia Berlin, social sustainability scientist from Gothenburg was described as she won one of the regional finals of the Swedish national Forskar Grand Prix. (’Researcher’s Grand Prix’). Her self-tailored costume, especially designed for the occasion, made both her and her presentation stick out.

Dylan sang about a Leopard-Skin Pillbox-Hat and Cohen about a Famous Blue Raincoat but Cecilia Berlin, she has a Bar Chart Costume! This spectacular garment was designed to be unfolded during the presentation to show an actual bar graph representing the population of Europe.

As a winner of the regional final she and seven other finalists will compete in the national final on December 5 in Stockholm. Forskar Grand Prix, a part of the yearly science event ForskarFredag (see European Researcher’s Night) is a national competition where scientists present their own research for the public.

Congratulations, Cecilia! Tell me, how did you come up with the idea of a ”bar chart costume”?
I have a background in Chalmersspexet (a form of farcical musical theatre produced and performed by Swedish university students), and since I knew that I needed to stick out in the competition, I decided fairly early on that I wasn’t going to take myself too seriously. I guess that with that background, stage fright wasn’t an issue, and I was willing to take a risk. I also sew as a hobby, mostly to take my mind off work by doing something with my hands, and after years of practice I’ve gotten fairly decent at it. A colleague joked that I should sew a new dress to wear for the competition, and suddenly the idea was born. So I spent a couple of nights devising this costume, slicing up and drawing on an old bed sheet and some tape to make a prototype. I would say that I developed my message in parallel with the costume, because modeling and testing it in front of a mirror made me think of new things to say and ways to say it.

How did you use your costume to get your messages across?
We were discouraged fairly early on in the competition from using a traditional PowerPoint presentation, and I agree that pretty often it only serves to divert people’s attention from the person speaking, especially if the slides show something different than what is being said. So it felt like a fun challenge to get people to concentrate on my message by literally taking it upon myself! I used the properties of the fabric to alternate between hiding and displaying my messages, using the sleeves and the skirt in particular. So the presentation was, in a sense, gesture-based, but it owes its character to the playfulness of dress-up. 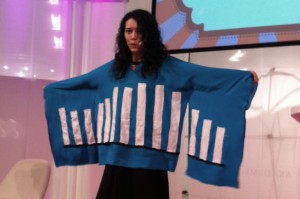 Did you experience any unpredicted problems?
There were some indirect problems. One thing I was worried about in advance was that the look of the costume (with broad vertical stripes across my chest) was a dead giveaway, so I was trying hard to disguise what I was was supposed to be (a bar chart) by wrapping the long, flowy sleeves around my arms, so I wouldn’t reveal my ”trick” too soon. True enough, some people suspected that I was wearing a costume, but they couldn’t guess what it was supposed to mean. One person even took it for an oversized football shirt, and wondered if I was really capable of sensible fashion choices for such an important event …

Also, during the first competition at Universeum, I was the first one to speak, and unfortunately for me, none of the wearable microphones were working, so in the end the organizers had to give me a hand mic. Since a lot of my presentation was based on gesturing with my hands and arms, this stressed me a little and had a bit of a hampering effect in the last part where I needed both my hands to hold up the edge of my skirt to show an illustration of a factory. At that stage, I had to put down the mic and rely on my own speaking volume, which I suppose didn’t come across as professionally as if my voice had been amplified all the time … But in the end, I suppose my unexpected presentation format won out. (And at the local final, thankfully the microphones worked!)

How did the audience react?
As I had hoped, not many had guessed the purpose of my funny look, so once I ”unwrapped” the bar chart there was some laughter, which generally makes a speaker feel that the audience is showing some affinity and relaxation. When I followed that up by lifting the hem of my skirt to show an embroidered image of a stereotypical factory, I was a bit worried that it may have been literally ”too under the belt” even if it didn’t really reveal anything inappropriate … Just that gesture may be a bit much for some people, but perhaps I got away with it since I’d already established that this presentation was a bit tongue-in-cheek. But as far as I could tell, the response was mostly positive. 🙂

How would you like to improve and develop your act, based on the bar chart costume?
I’m going to have to do that actually, since I made it to the national final! Two things: one is to sew a new version of the costume to look less obviously costumey (or at least, less like a clumsy football shirt) and the second thing is that I’m going to be coached on my speech performance. That may be needed, because I recently saw some video footage of me presenting in the regional final, and it seems that I have a habit of saying ”emmmmm” a bit more often than I’d like. But all in all I’m happy with the basic idea and will mainly work on making the surprise more of a surprise, and perhaps also put some thought into easier ’handling’ of the different storytelling elements of the costume.

Cecilia about her research at Institutionen för produkt- och produktionsutveckling (’Dpt of Product and production development’) at Chalmers University of Technology in Gothenburg:

”From the beginning, my research was about production ergonomics and to what extent Human Factors professionals are allowed to make changes to industrial work systems; quite often, it is not the same people who have the knowledge of ergonomics who have the mandate to make changes to systems. Often, that mandate lies with engineers or management, so it becomes very important for human factors professionals to convey the long-term effects of better human factors to those people.

Currently, my research has moved more towards Social Sustainability, which is a much broader term. I am currently researching what it means for manufacturing industry to become socially sustainable, and in what ways the demographic developments of Europe will be shaping factories in the future.”