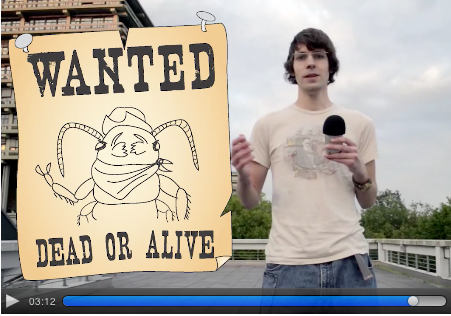 A Virtual Poster, as defined by Vasco Elbrecht from Ruhr-Universität Bochum, is not a static representation of a printed poster on a computer monitor. Instead, he has created a true video format which combines “Richard Attenborough commentary” with animated illustrations. The question is: Has Vasco Elbrecht defined the poster format of tomorrow—a self-produced three minute video?

How did you plan the virtual poster?
The virtual video was a spontaneous idea for a scientific poster which would to be presented on two conferences. The plan was to place a QR code on the poster which would link to the video, so people could learn about the project even if I am AFP, “Away from Poster”. I have seen QR codes on posters before, but often there were only linking to a website or email address. The idea of making a video about my master thesis project came from scientific videos on YouTube, like on the channels Veritasium or periodicvideos. Those video creators doing a great job in communicating science, and inspired me to make scientific videos as well.

How did you produce the virtual poster?
I did write down the key points I wanted to talk about on a pice of paper, grabbed my tripod, DSLR camera (Nikon D3100) and audio recorder (Zoom H2) and walked around at the university to find good places to film. Having no script has the advantage that one speaks more freely, but it also takes more tries to get good takes. It took me a whole day to get all the takes and locations I wanted to film. I then edited the video with Adobe Premiere Pro and made the animations in Adobe After Effects.

I can recommend to have some one with you that helps you with camera operation. Also, having one person you can talk to makes you talk more naturally and your assistant can spot mistakes or things that are explained not clear enough.

Which kind of reactions have you received?
Seeing how the poster and video performed on the conferences was quite interesting. On the first conferences, not many people bothered to take a look at my poster and the QR code with the video was hardly noticed. On the second conference I attended a week later the poster was more successful. Here, every one had the chance to give a two minute presentation of their posters for a large audience. This way I was able to tell people that there was a video on the poster which they can watch by scanning the QR code. Announcing the video was great, because it generated interest in the poster. Most people did really like the idea, but only few did try it out with their smartphone. Some people also ask me to write down the link to the video on a pice of paper, as they did not have a smart phone. However I remember also one German scientist who closed the video as he realized I was talking in English with quite an accent. But in general the virtual video was well received especially among the younger scientists.

Do you make plans for another video project?
Yes, I am planing to make more videos in the future. I will continue my scientific video tutorials on my website www.luckylion.de and I will also increase my efforts in making videos about my current projects which you can follow on GeneStream.de. In fact I have already made some new videos about the field work I did conduct at the beginning of this year.

Give three pieces of advice to a early career scientist who wants to explore the video media!

Vasco Elbrecht is a PhD student at the Department of Animal Ecology, Evolution and Biodiversity at Ruhr-Universität Bochum in Germany. As you can see from one of his YouTube channels, he does a lot of experimenting with video. He has also produced tutorials on how to use InDesign and Illustrator.

Vasco about his interest for graphc design and video:

As my father works as a graphic designer, I was exposed to media and design since my early childhood. I grew up with the Adobe Creative Suit and played around with Illustrator, Photoshop and Premiere Pro. I had a clumsy website which I would redesign every 6 month, because I didn’t like the design any more. I also started to get interested in video editing, as I was playing and recording video games at that time.

When I started studding biology in 2007, I realized how useful a basic knowledge of graphic programs and also and understanding of design can be for creating graphs and charts. For me the ability to communicate your scientific results in a clear and beautiful way is critical to engage your audience. It was frustrating for me to see how many of my fellow students were struggling with producing effective figures or even with aligning two pictures inside of Microsoft word. So I decided in 2011 to make video tutorials on YouTube, teaching the use of Illustrator and InDesign for thesis writing and poster making. As I enjoyed making tutorials and filming in general, I wanted to try out new things involving video. One of those projects was the virtual poster video.