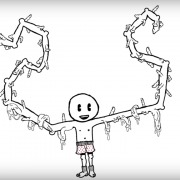 ”I’ve got eight legs and my name is super cool!” Matt Wilkins, postdoctoral fellow, and Tyler Corey, Ph.D. researcher – both from University of Nebraska – won a film festival prize for their music video about a spectacular order of arachnids.

Tell us a little about the Evolution Film Festival and how you won the 2016 edition.
The Society for the Study of Evolution hosted its Sixth Annual Evolution Film Festival in Austin, Texas. Of over 50 submissions, 13 were screened, and the winner was chosen by audience vote. There were a lot of really amazing contributions, so my creative partner, Tyler Corey, and I were so jazzed that we won!

Why should the video format matter to early career scientists?
Video format is really important for connecting with your audience. It needs to be the right length to convey information, but not lose their attention–and it needs to strike the right tone for the subject matter. We went for a zany music video format to try to offset the widespread phobias around spiders & other arachnids. We also wanted to convey that Arachnids are way more diverse and fascinating than just spiders–a fact that we hope sticks in your head after watching the film.

Please give us three bits of advice for scientists wanting to present their work to the public!

Matt Wilkins is the founder of Numbat Media which brings “cutting edge research into the evolution, ecology, & behavior of diverse plants and animals, direct from scientists!”

A short guide to movie making
Scroll to top
We use cookies to ensure that we give you the best experience on our website. If you continue to use this site we will assume that you are happy with it.Ok