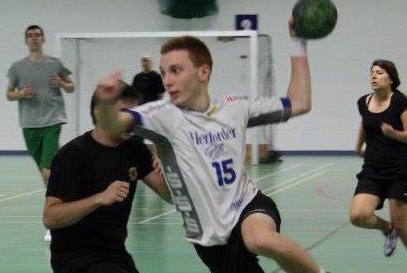 Under the theme Side Projects, Crastina portrays early career scientists who not only pursue a career in the academic world but who also have a life passion which has to do with communication in one form or another. (Se also interview with the dancer Alicia Gonzaléz Martínez and the musician Inari Kolu.) 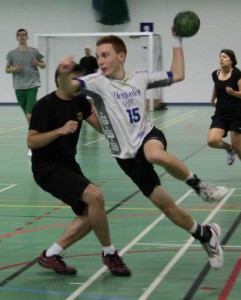 Felix Breyer, who studies cell signalling in Dundee, is passionate about handball. Apart from being a top-level player he has also spent innumerable hours as leader and organiser. Recently, he and his friends founded a club at the University of Dundee.

“Ever since I was nine years old I have been passionate about handball. From day one, the handball sport caught me and never let me go,” says Felix Breyer who studies cell signalling at the University of Dundee in Scotland. Felix plans to pursue a PhD in the field of cancer research, which will lay foundation for his subsequent career. In the future, he hopes to work with drug development of some kind.

Back in his home country Germany Felix was playing competitively on a high standard in a well-established club and also represented his county in the regional handball team. His passion for the sport made him hang on to it when he moved to the UK at the age of 15, where it is a rather ‘developing’ sport, the standard is lower and the possibilities are less.

When Felix became a student in Dundee in 2011 he found out that there was small local handball club but nothing existed at the university itself. He and his friend managed to spark a general interest for the sport interest among the students. Accordingly, the first ever handball club at the University of Dundee was established in 2012.
“This was an extremely exciting and lively period of time as it involved continuous communication between the university’s sports union and the student body. The first months of existence also involved plenty of promotion for the club and approaching the various student communities on campus but it paid off and was certainly a very rewarding year,” says Felix who thinks that the icing on the cake was the participation and success at various UK-wide university championships during
the first year of the club. 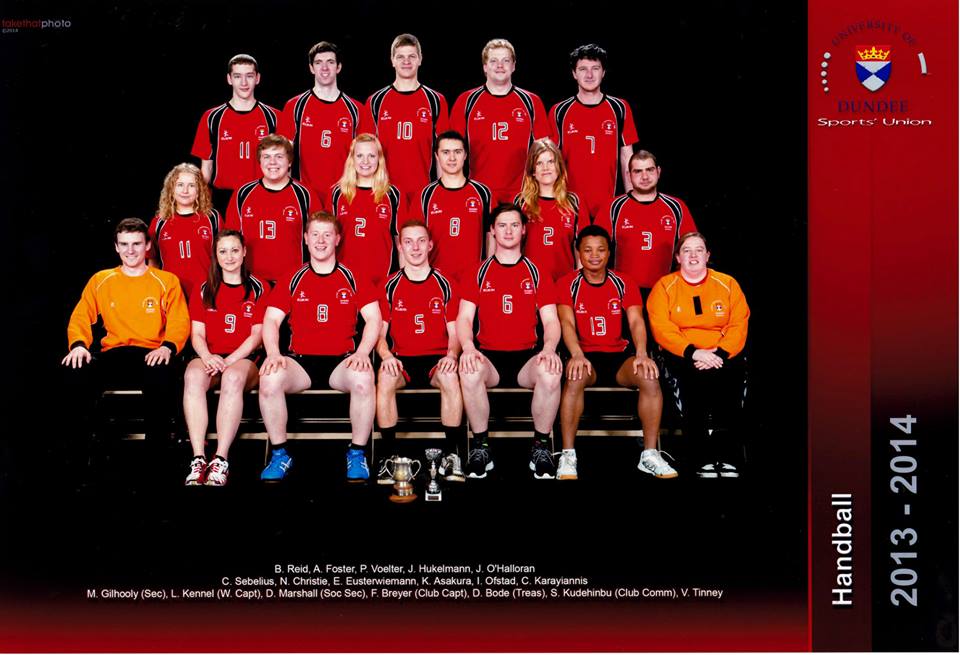 What similarities and touchpoints are there between team sport and science, according to your experience and opinion?
“There are far more similarities than you would assume at the first glance! Think about the following key characteristics: responsibility, collaboration, teamwork, trustworthiness and endurance. According to my experience, if any one of these is missing, neither a team sport match nor a science project will succeed. Similarly to science, team sports can only lead to victory and success if a group of people engages as one unit.”

How do you plan and organize the flow of communication within the club?
“The flow and organisation of communication within the club changed and adapted over the years, which I personally think is very advantageous and effective. During the first year, club communication originated from my friend and myself as we were very familiar with the situation and we wanted to ensure the club’s stability just after its establishment. However, number of members doubled in the second season and I thought it was important to have a larger club committee of five members to ensure that every single student is part of the communication network within the club community. With even more members at present, the committee now comprises nine students, including a dedicated media and communication officer.”

Which are the most important communication skills of a handball coach?
“Handball is probably the fastest team sport in the world and there is not much time to communicate during a competitive match – communication has to be explicit and concise! Therefore, despite it sounding quite harsh, if you fail to communicate in a clear and effective way you will loose! There are two 60-second team timeouts a coach can take during a match and no matter how much he/she would like to communicate with the team, the coach has to be able to express it in one single minute – clearly a ‘communication hurdle’ not everyone can overcome.”

How should a coach act to turn a game around?
”A sports coach is a role model and has to act like this during a match, whether the team is leading or not. But a coach has to step up to his/her responsibilities even more to turn around a match. How? To change the momentum in a match the coach has to motivate a team, show passion and maintain the team spirit! But as I mentioned before, communicating in an effective way with everyone on the court is a prerequisite because a coach can shout and gesture indefinitely, it will not make a difference if the coach doesn’t get through to the players!” 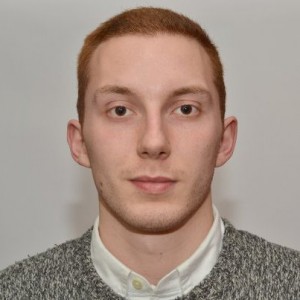 Felix Breyer is currently enrolled on a B.Sc. Cell Signalling degree at the University of Dundee in Scotland. As part of his undergraduate studies, he has just completed a one-year research placement at the MRC National Institute for Medical Research (now The Francis Crick Institute) in London, UK. He is now starting his final Honours year at the University of Dundee, where he will graduate in summer 2016.

Finally, what can students learn from athletes regarding the management of rest and recovery?
“In sports you will only succeed and reach your goals if you are balanced and feel healthy. Of course this requires regular training with intense
physical activity but at the same time periods of rest to ensure top performance during competitions. A successful athlete certainly knows when to recover to perform at the highest possible level. How does this translate into academia? Consider the match as the deadline or exam and training as revision or preparation. The student has to be perfectly prepared for an exam but at the same time he/she has to feel healthy and balanced, not exhausted. To put this in a nutshell, I think that a successful athlete prepares in a very similar way as a student should do to successfully accomplish academic assessments.”

Communicate – Let everyone in the team know what you expect and vice versa to drive continuous development in the right direction.

Customise – Rather than generic trainings, particularly focus on the team’s strengths and weaknesses.

Celebrate – Motivate players and show passion to maintain a great team spirit, which is essential for success and team sports achievements.

Science communication is no joke. But it should be (Dean Burnett, September...